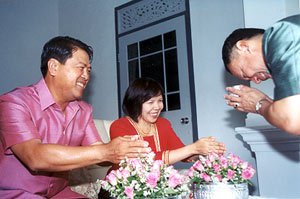 PHUKET TOWN: About 150 Thais and foreigners, including government officers, local politicians and business leaders, gathered at the Governor’s Mansion on Narisorn Rd this morning to take part in the traditional exchange of New Year blessings with Phuket Governor CEO Pongpayome Vasaputi and his wife, Mantana. Phuket’s three Vice Governors were the first in a long queue of well-wishers to exchange blessings with the couple in a ceremony that lasted longer than two hours. One by one, people approached Gov Pongpayome and K. Mantana and wished them happiness and luck in the coming year, and after, by pouring fragrant flower petals in water over the governor’s hands, which were pressed together in a customary wai. Gov Pongpayome returned the compliment by sprinkling his guests with some of the water. The ceremony is held every year at the Governor’s Mansion. Each person who comes to take part is treated to a free breakfast.