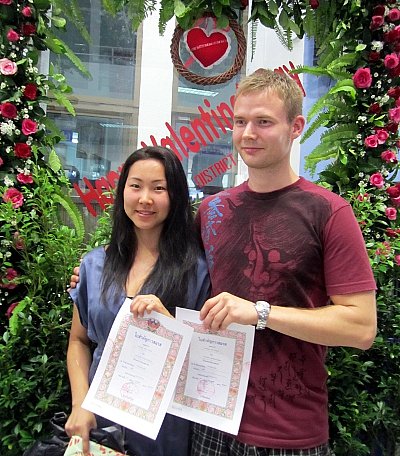 Muang District Chief Supachai Pochanukul told the Phuket Gazette, “We prepared a special registration desk for the couples and gave them all Valentine’s Day gifts. We issued certificates to 130 couples; it was a very lovely day.”

Among the newlyweds were Maya Enevoldsen and Johan Winther of Denmark.

The couple finally wed 10 years after committing to each other informally on Valentine’s Day 2002, they said.

“We’ve been together ever since,” Mr Winther said.

The couple were scheduled to have a formal wedding ceremony at Kata Noi Beach last night.

Similar activity was reported at other district offices around the country, including 900 couples who registered marriages at the Bang Rak (“Village of Love”) District Office in Bangkok.

Phuket mass wedding goes off – with a hitch