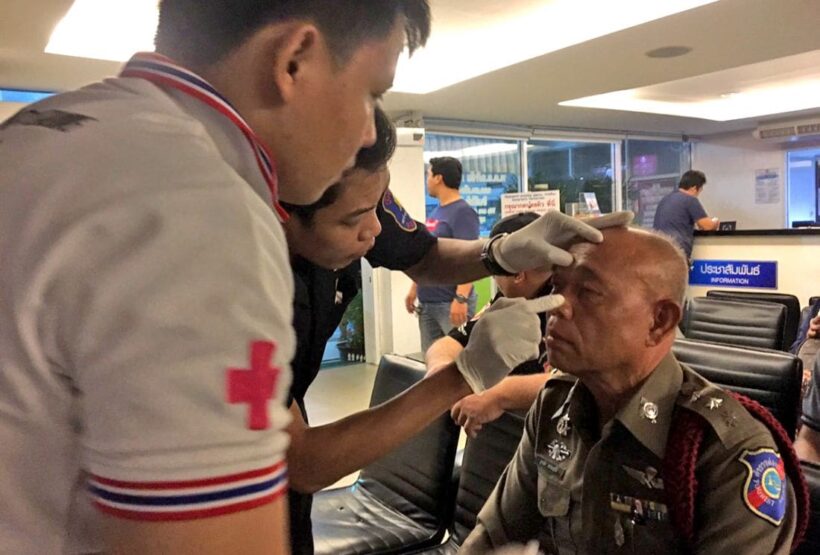 A conscript, whom Thai media have described as a ‘gay soldier’, refused to go quietly after creating trouble in Walking Street. It got worse from there…

His partner became involved after a member of the public stepped in to assist a police officer before the men were finally overpowered. The melee continued at the Pattaya police station where serious charges were laid against the men.

One of the men threatened to shoot the officer.

According to Siamchon News, the incident began in Walking Street around 4am when a tourist reported trouble.  Police headed to the scene.

Pol Capt Sukhachai Thamsuree was allegedly kicked by Army conscript Jakraphat Khamreuang who was resisting arrest. A member of the public came to the policeman’s aid and this infuriated Jakraphat’s gay buddy, 31 year old Phittinan Charoenwong, who joined in the fight. Phittinan hit the police captain in the face during the tussle.

Back at the station Jakraphat threatened to shoot the police and made things worse for the pair as they hurled additional abuse, according to Siamchon News.

The pair are currently detained and have been charged with drunk and disorderly behavior, resisting arrest, assault on a police officer and slander.

VIDEO of the police reaction to the incident HERE.

Pattaya’s reclaimed beaches are washing away

Chinese tourist mixed up in a ‘misunderstanding’ in Pattaya