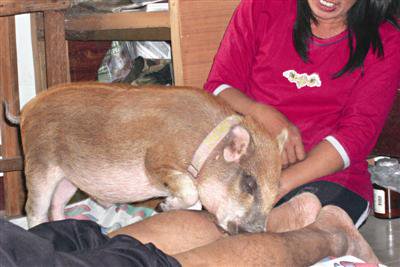 In exchange for occasional mackerel or a few sweets, Phalo uses his snout to massage tired limbs – reportedly with as much skill as the most expert human hands.

The unusual talent was discovered by the little boar’s owner, 30-year-old Wachareewong Somchai, when he took Phalo to play in the bedroom and the piglet began to use his snout to rub his owner’s calves. Mr Wacha-reewong then pointed to other parts of his body and Phalo duly obliged, giving him a complete body massage.

When word spread around the village, neighbours came to try out the piggy masseuse for themselves.

Mr Wachareewong calls Phalo’s name, points to the person and the the piglet starts the treatment. Phalo duly continues until Mr Wachareewong tells him to stop.

The pig came to live with Mr Wachareewong and his wife, 30-year-old Sao Somchai, after Mr Wachareewong found him at a friend’s house in Fang District. The friend explained to Mr Wachareewong that Phalo’s mother had given birth to a litter of five piglets, but she then trampled four of them to death.

Phalo, also trampled by his clumsy mother, somehow managed to survive. Feeling sorry for the creature, Mr Wachareewong asked his friend if he could take the piglet home. Mr Wacha-reewong and his wife raised Phalo on baby formula, then weaned him onto solid food.

However, unlike normal boars, Phalo does not like typical pig fare such as rice bran. Rather, he insists on human food. His favourite dish is mackerel with rice.

Also quite strangely, given his species, Phalo does not like playing in the mud – he is a house pig through and through, even sleeping in the same bed as his owners. Phalo, who, incredibly, has never wet the bed, wakes the couple up with his snout to go outside every morning. He also likes to go for rides on the back of his owners’ motorcycle.

As Phalo’s fame spread, offers started coming in to buy the boar – some for more than 10,000 baht. But Mr Wacha-reewong and Mrs Sao, who have no children, said that they love Phalo like a child and could never sell him.

Mr Wachareewong said that he believes that in a previous life Phalo was a human and that the two of them must have made merit together so they could be reunited in this life.