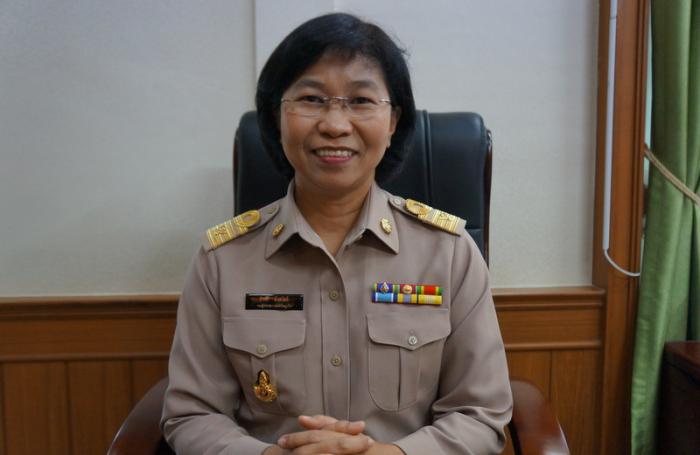 PHUKET: Phuket Vice Governor Siwaporn Chuasawad is originally from Bangkok, but her family moved to Samut Prakan in an official capacity, as her father worked for the Royal Thai Navy. She assumed her current post on October 10, together with two other vice governors. Her husband has recently been appointed as Deputy Director of the Phuket Land Department.

V/Gov Siwaporn earned her Bachelor’s in Law from Thammasat University and Master’s in Public Administration from Burapha University.

She started her career in 1987 as a technocrat in the Land Department. She has worked in several provinces in Thailand, including Phuket, before taking up the post of Phuket Vice Governor. She was previously working as an inspector at the Land Department in Bangkok.

Here she talks about the different aspects and challenges of her position as a high ranking official.

Having worked in the Land Department prior to being appointed as the vice governor, I never felt as if I needed to act any differently from the men in my field. However, I do acknowledge that there are some differences between men and women in the workplace. For my part, I always push myself to be better and stronger. In my capacity as vice governor, I am required to go out for inspections. Therefore I must keep myself prepared at all times, for any kind of situation.

I personally believe that as long as I do my best, nobody can say anything. I have always been sincere in my job and given it my best. If we start choosing what jobs are good for men and which for women, we won’t get anywhere. When I was an inspector, I did not choose to work elsewhere, I was sent and so I did it.

Once I became the Land Office Chief, I chose to work in Sisaket, a Northeastern province of Thailand. Many people have asked me why I, as a female, chose that province, as it was very far away from all that was familiar and comfortable. The thing is, I never thought of it as a ‘man’s job’ or ‘woman’s job’. I believe that the quality of the work you do should be the only indicator of the respect and acceptability you gain.

I admit that the position of vice governor is quite different from my previous job, but I have done my research in the past weeks and rapidly learnt what needs to be done here on the island. As per Governor Chokchai Dejamornthan’s orders, I am in charge of societal and economic matters. This is a large area and requires me to coordinate with several departments to get the job done.

These fields are interconnected in many ways. Societal matters are concerned with migrant workers and laborers, including issues of social security. This, in turn, is connected to the economy and tourism. So several departments are included in the process and we need to work with all of them. Each department has its own responsibility and authority. I work as a point of contact for everyone and ensure that all aspects of a situation are evaluated and considered. This prevents bias and one-sided opinions.

I understand that the government has rules and procedures that must be followed. However, when things get delayed sometimes, it is my job to ensure that the concerned department gets the necessary push to expedite the process.

One of the most important things, from my point of view, is having a database. If we work with confusing, inaccurate or slow-to-extract information, it affects important decisions, causing them to be delayed or misjudged. That is why I am urging each department under my watch to have an accurate, up-to-date database of information. It is also important to connect with others and share relevant information with them, so that all departments can benefit from it and provide better services to the public.

For instance, the Tourism Association records a certain number of tourists, while hotel associations may have a completely different one. So we have to find out what information is missing and why, and make it more accurate and complete. Governor Chokchai expressed a similar point of view when he spoke of the concept of ‘one information’. I know that it is a complicated and time consuming task, but we are working on it.

The main challenge is how to get an updated database from all departments, both official and private. My job becomes that much more challenging when I have little or outdated information to work with. It is essential for me to know as much as possible, in order to make informed, insightful decisions.

I always remember His Majesty King Bhumibol Adulyadej’s royal words to guide me in my work. Every official has surely faced this problem in life: that they feel they are working hard, but are not moving forward in this work. So I think of His Majesty’s words, “We work to fulfill our duty, not for the sake of rewards. When we do our best in our endeavors, that is the greatest reward in itself”.

I have been reading these words since I was very young. Sometimes I felt like I was doing a great job, but not getting promoted, while others around me were prospering even though they hadn’t worked as hard as I had. So I always remind myself of these words for inspiration.

Another thing His Majesty tells us is that we must have knowledge in three areas: academics, coordination and procedure. These are truly the most useful skills of all.

As I said before, we cannot work alone. We must connect and network with each other. Neither government nor private sectors can work alone. This includes the media as well. We all need to pool our knowledge and resources, and work together to move forward.

Opinion: No cellphones while re-fuelling

Ministry of Farang Affairs: Not a gogo bar girl