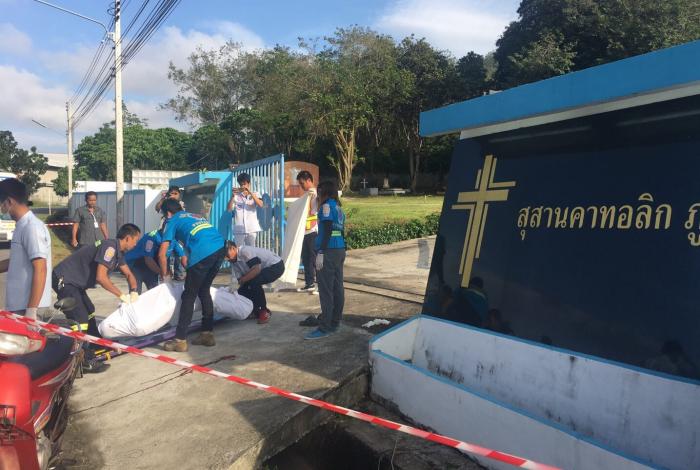 PHUKET: A Thai man was crushed to death at a Phuket graveyard this morning.

Lt Kwansirinath Thairat of Wichit Police arrived at the scene with a doctor from Phuket International Hospital and Kusoldharm Foundation rescue workers, after passersby saw him lying there and notified authorities about 8am.

He is believed to have been dead for at least 30 minutes when officials arrived.

“Relatives of the 63-year-old victim, Virat Saelim, told us that he rode his motorbike into the ‘Catholic Phuket Graveyard’ behind Darasamuth Phuket School to pay his respects to his mother who was buried there,” Lt Kwansirinath told the Phuket Gazette.

“We believe he was closing the gate on his way out when one of the wheels broke, causing the gate to fall on him.”

His body was moved to Vachira Phuket Hospital. Doctors confirmed the cause of death as a broken spine due to the weight of the gate.

Police said that there will be no further investigation as his relatives have no doubt about the incident being an accident.