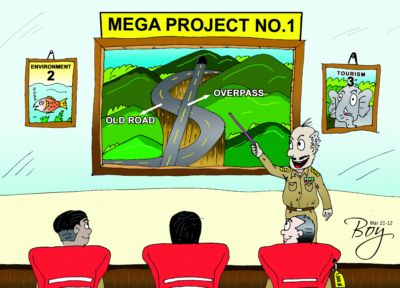 PHUKET: It is a pity that regional mass transport issues, and ‘mega-projects’ to whoosh ever-more tourists around the island, trumped the need for more sustainable tourism development during Tuesday’s mobile Cabinet meeting here in Phuket.

In the first-ever official visit to the island by a female Thai premier, PM Yingluck Shinawatra performed admirably. She was smiling and charismatic throughout, despite a truly hectic schedule and wave after wave of people seeking her attention.

These individuals ranged from industry leaders seeking billions of baht for infrastructure improvements, to the poorest of the poor, who asked only to continue living hand-to-mouth on lands inhabited by their ancestors generations ago.

One of the many stops on PM Yingluck’s whirlwind tour was the proposed site of the 200-million-baht Klong Koh Pee elevated road project, which Transport Minister Jarupong Ruangsuwan had a week earlier guaranteed to gain Cabinet approval – and so it did. (See page 5, current issue of the Phuket Gazette. Digital subscribers click here to download the full newspaer.)

The project, begun over a decade ago and then stalled because it required the destruction of protected mangrove forest, will create a 600-meter span of road over the mangroves, connecting Saphan Hin directly with main roads to its west.

The Gazette applauds the Cabinet decision to finally complete the road, which will greatly improve access to the island’s largest recreational area, along with its numerous schools and government offices.

Just as importantly, the decision will spare the mangroves lining the canal (klong) the same fate that many other mangrove stands have suffered – namely encroachment and other human activities such as illegal road construction of the kind tacitly supported by at least one former high-ranking bureaucrat.

Those mangroves, being hearty enough to colonize meters-thick muck and provide stability for the “soil” in the Klong Koh Pee area, after decades of tin mining, is a good thing indeed – most notably because the Saphan Hin Landfill is now home to what is probably the single largest accumulation of solid waste in Southern Thailand, much of it perilously at, or just above, the high-tide mark.

The 200 million baht price tag is modest compared to some of the other mega-projects hyped during the Cabinet meeting, including the poorly-conceived underpass projects and a tunnel which, if completed, would result in windfall profits for “investors” who brazenly built above the 80-meter (over sea level) limit along the existing road.

It would also be a small price to pay for continued insurance against another catastrophe such as the June 2007 disaster in which toxic runoff from the landfill into local waterways devastated the local fish farming industry, not to mention the possible impacts of rising sea levels, storm surges or future tsunamis.

Phuket Opinion: Take off the gloves

Phuket Opinion: Phuket land probes “a plus’ for Phuket