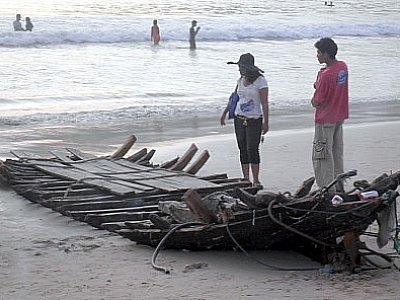 PHUKET: Region 4 of the Internal Security Operations Command (ISOC) has formulated a “Protecting the Andaman” strategy to prevent Rohingya boat people from illegally entering Thailand in Ranong, Phuket and other Andaman Coastal provinces.

Maj Gen Manas Khongpanin, director of the ISOC region, revealed that the security plan is to stop the Rohingya from entering Thailand, especially along the coastline of Ranong province.

ISOC region 4, together with at least 17 other government and private sector organizations in Ranong, collaborated on the plan.

The strategy is aimed at preventing the stateless Rohingya people from entering Thai territory, and helping those who are able to enter to get back into international waters in a humane way.

“This has been happening for more than 10 years. Since November last year, 2,522 Rohingya illegally entered Thailand, arriving in Ranong by boat,” he said.

“Rohingya always sneak into our country by sea along the Andaman coast. The first time was in 1998, when we caught 104 Rohingya who illegally crossed our border. After that there were a lot more Rohingya arriving every year, especially from November to April,” said Gen Manas.

November to April typically sees a weakening of the monsoon over the Andaman Sea, making sea conditions calmer offshore – although heavy seas are a possibility year-round due to storm activity.

“The Rohingya usually travel by old fishing boats from Rakhine State, on the western coast of Myanmar, or the southern part of Bangladesh. It is a journey of about 780 miles to reach the Thai border, and typically takes them about 15 days,” he said.

“Last year 351 Rohingya arrived on our shores,” he added.

“I believe there will be more Rohingya coming this year. They are trying the find safe places to land, especially in Ranong and nearby provinces. Their main motive for leaving their country is the poverty and difficulty of life there. The Rohingya people are not considered citizens of Myanmar,” he noted.

In recent years the Rohingya had improved their tactics, making them more difficult to track, he said.

“Before, Rohingya typically came in large groups, choosing the mainland as their initial landing point. Now they have changed their tactics. They travel in smaller groups and land on islands first, then plan the trip to the mainland from there,” said Gen Manas.

“Normally they are assisted by human smugglers in Thailand, so we have to try to intercept them both at sea and on land,” he added.

Thailand’s National Security Council tasked ISOC, a military unit dedicated to national security issues, with the difficult job of developing an integrated and humane solution to the Rohingya problem.

“We call our two-part plan ‘Protecting the Andaman’. The first part involves educating government officers likely to be involved on how to react when they encounter people who illegally enter Thailand by sea. In this way they can apply that knowledge as events are happening,” said Gen Manas.

The effort also involves preparedness by the public-at-large, he said.

“We will educate people in areas where Rohingya are known to land, asking for their help in the monitoring effort. If they see Rohingya approaching, they will know to report directly to us. We have already trained 400 people living in coastal areas and the islands off the Ranong mainland,” he said.

“We will also coordinate with fishing vessels working further out to sea to receive early warning of Rohingya as they approach our territorial waters. We plan to install radios on every island so islanders can inform us if they see any Rohingya approaching,” he said.

The second part of the plan is the reaction effort. Those who have been trained can be deployed to use “appropriate means” to stop Rohingya from entering Thailand.

“Any of the trainees who see Rohingya attempting to land must first try to persuade them not to come ashore. They must provide them with enough food, water, medication, fuel, and other necessary supplies so that they may continue their journey for another 15-20 days to their desired destination,” he said.

In 2009, Thailand faced harsh international criticism when authorities arrested Rohingya refugees and sent them back out to sea with limited provisions. In February of that year the Lawyers’ Council of Thailand (LCT) released a statement demanding the government “tackle Rohingya trafficking organizations”.

The statement followed a series of conflicting reports of transfers and possible human rights abuses by the Thai authorities on a group of 226 Rohingya migrants.

In February 2011, following appeals from the international community and local organizations, the United Nations High Commission on Refugees (UNHCR) visited 33 Rohingya men in custody at Phuket Immigration who had come ashore at Rawai the previous month. The UN team then went to Phang Nga to check on the well-being of another group held there.

Efforts to “repatriate” migrants is always difficult, but even more so when they are stateless. Burmese caught working illegally in Thailand are typically repatriated at Kawthaung, across the strait west of Ranong Town.

This is not an option for the stateless Rohingya.

On November 24, 2011, when a boat full of Rohingya were detained on an island off the Phang Nga coast, all 95 were transported to the 2nd Infantry Battalion, 25th Military unit, at Rattanarangson Camp in the Ratchakud District of Ranong province.

On that occasion, the Gazette, which has been monitoring and reporting on Rohingya developments closely for many years, was informed by an official from the camp that the Rohingya had been provided with a new boat, engine, fuel and enough food and water to take them on to their unspecified destination. Military personnel even went so far as to give the Rohingya 20 baht each from their own pockets before escorting them back out to international waters, the official said.

In one of the latest incident reported by the Gazette, Chalong Police rounded up 90 starving Rohingya who came ashore at Nai Harn Beach. The Rohingya, all males, were on their way to Malaysia when they ran out of food and their wooden boat began to fall apart at sea, forcing them to come ashore, they said.

However, not all of the refugees were accounted for. One member of the group said that more than 100 Rohingya were aboard when the vessel beached.

Despite media reports that Muslim Rohingya invariably try to make it to Malaysia, there is a small Rohingya community living in Phuket, the head of the Police Special Branch told the Gazette several years ago.

Many make a living selling roti, the Indian-style crepe popular across the South of Thailand.

Poll: Which Cabinet-approved project will most help Phuket?