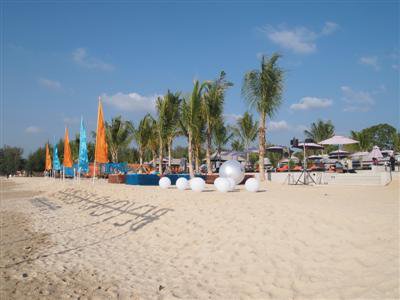 PHUKET: The Kata Group, one of Phuket’s best-known resort chains, celebrated the latest addition to its portfolio of luxury resorts on Friday.

Located in Phuket’s neighboring province of Phang Nga, the new property in Khao Lak, branded as the ‘Beyond Resort Khao Lak’, is the group’s first foray out of Phuket since the opening of its Kandaburi Resort and Spa on Koh Samui.

On Friday, Admiral ML Asanee Pramoj, a member of the Privy Council, presided over the official opening of the resort in its restaurant.

Pamuk Achariyachai, chairman of the Kata Group, said the group had been operating for 32 years.

As a result, the group had decided to open two Beyond Resort properties, which will be promoted as romantic getaways by the sea.

The Khao Lak property is set on 70 rai and rates as a ‘four plus’-star hotel.

The resort is aimed at couples wanting a romantic and quiet break from civilization. It is targeting a mostly European and Asian clientele.

Mr Pamuk said that every inch of the 115,000 square meter property was covered by Wi-Fi Internet. The resort also features a library with books in several languages, a business contact center, meeting and seminar facilities, various restaurants, two bars and a wine center with quality vintages from around the world.

The resort has been operating unofficially for two months and has already received a good response from tourists, Mr Pamuk said.

Mr Pamuk said he expected tourism in Khao Lak to continue to grow, since it retained its natural beauty and peaceful atmosphere. This makes it appropriate for tourists who want to relax in privacy.

Suzuki Swift on a roll in Phuket