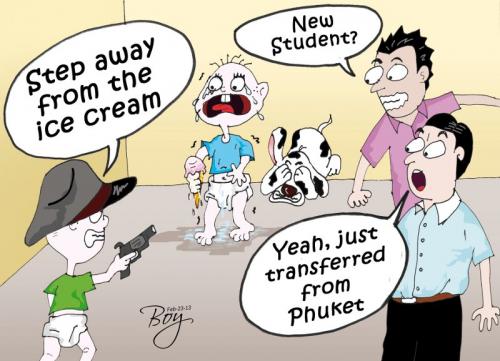 PHUKET: Provincial Police Commander Choti Chavalviwat should be applauded for getting personally involved in the investigation into the attack on a teenage couple who claim to have been assaulted by two sons of a Thalang Police officer on St Valentine’s Day (story here).

Reports of assault involving minors are all too common in Thalang, which has a history of teenage gang violence going back several generations. The case in question is especially sensitive, however, because of the victims’ claim that the police officer himself was directly involved in the attack, having restrained the male victim while one of his sons threatened him with a firearm.

The allegations are disturbing in several regards, including why the officer got involved in the dispute rather than trying to diffuse it and, just as importantly, how the officer’s son came into possession of a firearm.

Cases such as this are always potentially explosive because of the widespread belief, held by a large majority of Thais, that police officers – as well as their children and other family members – are allowed to operate above the very laws they are sworn to uphold.

The same belief also applies to members of rich and powerful families, who are also regarded as being above the law by the average citizen. There is no lack of examples in the national media to back up this way of thinking, which seems to apply to people on both sides of the current political divide. Even the son of one sitting Cabinet member is widely believed to have gotten away with murder due to his father’s political connections.

It is this sense of social injustice and inequality, of course, that is a primary obstacle to Thailand’s national development. In addition to fostering the perfect social environment for corruption to flourish, it also creates a collective mindset that protest – which almost always comes with the threat of violence – is the only available path to justice. We see this played out again and again, both locally and on the national stage, with needless loss of life, untold property damage and devastating impact to our economy.

If their allegations prove to be true, the couple who went to the Phuket Press Club to report the abuse should be commended for their bravery; even if, by their own admission, they were acting out of fear.

As Maj Gen Choti is probably by now aware, Thalang Police District has been the site of numerous anti-police protests in the past. In typical fashion, these end with the lightning transfer of the officer or officers involved, who are seldom, if ever, prosecuted.

Let us hope against hope that in this case the circumstances will be fairly and thoroughly investigated and, if sufficient evidence is found, the case tried in the Criminal Court system, with the officer stripped of his rank if found guilty.