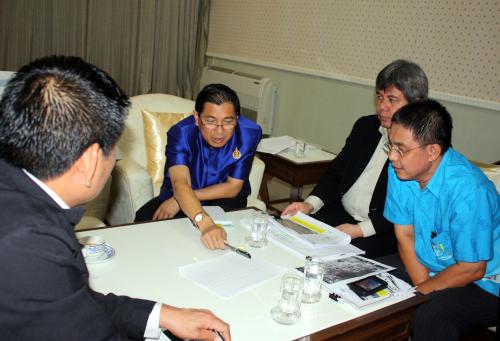 PHUKET: A May start date for the long awaited 170-million-baht Klong Koh Pee flyover project, which will now traverse 700 meters of protected mangrove forest, was announced yesterday by the Phuket Governor.

“The people of Phuket have been waiting for this project to start for almost 20 years,” Phuket Governor Maitri Inthusut said. “The project is important, as it provides a much needed direct connection between Sakdidet Road Soi 7 and Saphan Hin.”

The plans for the project have been modified since Cabinet approved an original 200-million-baht budget for the mangrove flyover (story here). The approved budget was planned to be released in two stages: 40mn baht this year and 160mn baht in 2014. Of the new 170-million-baht budget, 34 million baht has already been released for the 2013 fiscal year. An additional 68 million will be allotted in 2014 and the final 68 million in the 2015 fiscal year.

Estimated costs for the project have dropped by 30 million baht since Cabinet’s approval and the length of the over all project has been extended from 600 meters to 700 meters. Many other small adjustments have been made to the construction plan: the elevated section of road has been dropped from three and half meters to three meters; the length of the elevated section of road has gone from 510 meters to 495 meters; and the construction company that does take over the project has been allotted an additional 240 days to complete the flyover.

The four-lane-divided road will still include a bike lane and a pedestrian walkway, said Kanokthep Rattanadilok Na Phuket, the engineer in charge of the project.

“There will be a five-meter gap between the two [elevated] roads to allow enough light to keep the mangrove forest healthy, and the road, being elevated, will not affect the low and high tides,” said Mr Kanokthep.

However, the construction company that take responsibility for the Klong Koh Pee flyover will have to adhere strictly to regulations to prevent serious damage to the mangroves as the project gets underway, Gov Maitri said.