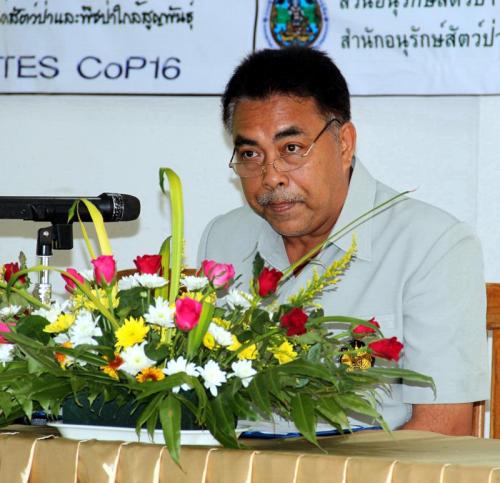 PHUKET: Department of National Parks, Wildlife and Plant Conservation (DNP) officers, non-governmental organizations and legal wildlife and fauna traders attended a one day meeting in Phuket as part of the 16th Convention on International Trade in Endangered Species of Wild Fauna and Flora (CITES) being held in Thailand.

Members of the meeting expressed their gratitude for the honor of holding the event in Thailand, as the Kingdom attempts to buff its tarnished reputation for being an international transit point for dead and live species of protected wildlife.

“From 2009 to the present, there have been more than 3,000 cases involving protected species of animals, with more than 50,000 being recovered alive and massive amounts of animal remains being seized within our borders,” said Department of National Parks, Wildlife and Plant Conservation (DNP) region 5 Director Metee Meechai, who chaired the meeting at Sirinath National Park yesterday.

“Thailand is a member of CITES, as we understand the importance of conserving the world’s resources for future generations – it is such an honor for Thailand to be chosen to host the event this year,” Mr Metee said.

One of the key topics brought to the table during the meeting was the illegal ivory trade, which has recently seen American movie star Leonardo DiCaprio throw his weight against it. The actor signed a World Wildlife Fund petition this week, urging Prime Minister Yingluck Shinawatra to outlaw the sale of all types of ivory within Thailand, The Hollywood Reporter said.

“Africa is in the midst of an epic elephant slaughter. Tens of thousands of elephants are killed by poachers each year, all to meet demand for their ivory tusks which become carvings and bracelets. And much of the ivory trade goes through Thailand. We can help save these beautiful animals. Join me and the World Wildlife Fund and tell Thailand to ban all sales of ivory,” the movie star wrote on his Facebook Wall on February 18.

The meeting in Phuket, which included traders from Nakorn Sri Thammarat, Trang, Satun, Krabi and Phang Nga, focused on reiterating the current laws in Thailand with regards to protected species and the trading of ivory.

“The meeting was conducted in order to have the traders acknowledge the regulations and to encourage them to follow the laws,” said academic and DNP Region 5 Wild Animals Protection Department Chief Suruwuth Sutthamusik.

Thailand Futsal: Phuket United back on track with away victory