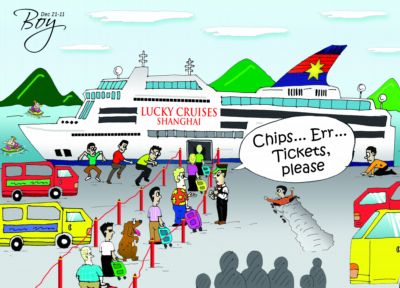 PHUKET: With Phuket’s Deep Sea Port being targeted for a huge upgrade, the island has great untapped potential in the global cruise ship industry – not just as a port of call but also as a port to call home.

Mention the words “cruise ship” and “Phuket”, and most readers will conjure up memories of the ugly blockading of our port by locally based taxi drivers, but its current location is the only logical place for such a facility on the island.

Many cruise ship operators in the region currently drop anchor off Patong, where a floating pier is moored in the high season, the only time weather permits. This is a pity because cruise ship tourism is potentially a lucrative year-round proposition for Phuket, which has a virtually unbeatable array of onshore activities to offer visitors.

Unfortunately, the Deep Sea Port is too far from Patong, Phuket Town or other popular destinations to make such destinations very attractive to cruise ship passengers, who typically enjoy only a morning, an afternoon or at best a day here. As such, unless the current transport situation can be vastly improved, the port’s appeal will largely remain limited to all but military vessels and cargo ships.

Upgrading the facilities at the port to accommodate Thai-flagged vessels is one concept than has until now been given little or no attention in the local press. As a major regional port, Phuket already has most of the infrastructure needed, including a petrochemical tank farm and container facility to provision even the largest seagoing vessels. There is also a great deal of public land available for expansion.

Another area of potential interest might be casino gambling, which though illegal in Thailand and its territorial waters, is common aboard cruise ships worldwide, allowing punters to enjoy games of chance while in international waters.

Many arguments have been put forward asserting that the illegality of gambling in Thailand not only costs the nation untold billions in lost revenue to casinos set up along its borders, but also perpetuates an underground industry in the country that fuels state-sector corruption while undermining the democratic process by financing vote-buying. Estimates by the The National Economic and Social Advisory Council have put the loss as high as 800 billion baht annually.

Establishment in Phuket of “casino cruises” of the type already popular in many other parts of the globe would not only be a logical first step toward development of Phuket as a regional hub for the cruise ship industry, but would also serve as a boon to the economy.

It would also provide an elegant solution to the discomfort suffered by our legislators when they contemplate legalized gambling on shore.