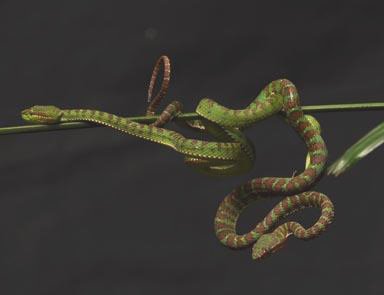 PHUKET: In an unexpected Christmas Day development, Thai and Belgian researchers have confirmed the discovery in Phuket of a previously unknown species of Pope’s pit viper, and will unveil the serpent next week at the Korat Zoo.

Commonly known as the ‘Phuket pit viper’, the new species Trimeresurus (Popeia) phuketensis was discovered in the Khao Phra Thaew Wildlife Sanctuary on October 5, 2009, according to Kirati Kunya, a member of the research team.

The snake was given the Thai name ngoo khiew hang mai Phuket, which translates, somewhat colorfully, as the “Phuket white-tailed green snake”.

The researchers studied and examined specimens for two years to ensure the snake represented a new species, Mr Kirati said.

The discovery and research later was printed in the 30th issue of the Russian Journal of Herpetology in November, and the discovery finally announced to the public a few days before specimens will go on display at the Nakhon Ratchasima (Korat) Zoo.

The new species was described and named for its habitat, in the Khao Phra Thaew Wildlife Sanctuary in Phuket. The last large expanse of virgin rain forest on the island, the area is also home to a type of fern found nowhere else in the world.

Other members of the the research team included: Montri Sumontha, a senior researcher at Ranong Fisheries Department Office; Thawat Nittikul, head of the Khao Phra Thaew Wildlife Sanctuary; Suwit Pannadee, director of the Gibbon Rehabilitation Project, and Belgian biologist Olivier SG Pauwels, who has co-described over 40 species of insects and reptiles.

The researchers said the Phuket pit viper is likely to have originated in the Andaman island region. Tree-dwelling, it plucks its main prey of rodents and small lizards from the rainforest floor. Adults reach about a foot in length.

Females give birth to eight to ten live young after a three-month gestation period.
Described as “somewhat fierce”, the snake uses its signature white tail as a decoy to attract its prey.

“This discovery shows that the area still has a great deal of biodiversity that needs to be conserved, not just for its own sake but for the sake of humanity too,” said Mr Kirati.