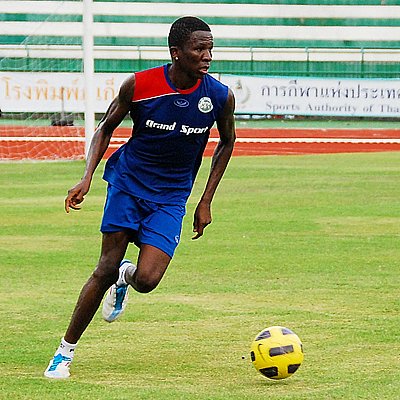 PHUKET: Phuket FC are hoping for a large fan turnout this evening when they kick off against Air Force Utd at Surakul Stadium at 6pm.

Phuket FC will go into the match coming off a disappointing home loss to Suphanburi FC on Wednesday, while Air Force Utd greatly improved their chance of avoiding relegation with a 1-0 home win against Ratchapracha FC 1-0 in their encounter.

Assistant Coach Apichart “Mo” Mosika said Poramat “Mud” Krongborisut will be the only player to have to sit out the match on a penalty ban, while crowd favorite Jonathan Matijas will be in goal after sitting out the last match.

Coach Apichart Watcharapong “Pae” Jun-ngam and Tameezee “Z” Hayeeyusoh will be up front, supported by midfielders Sarach “Tang” Yooyen and Abdoul Coulibaly in the middle, Jongrak “Bank” Pakdee on the right, and Niran “Noom” Panthong at the left.

A penalty ban on left defender Nitipong “Bas” Limsuwan has ended, but Coach Mo has decided to keep him on the bench in favor of Nithirot, whose abilities he would like to further assess.

“It’s near to end the season now so I would like to rotate the players, give them as much chance to perform as possible in order to let the management decide who to re-sign for next season,” he said.

Coach Mo admitted he was disappointed by the performance his ‘Southern Sea Kirin’ last week.

“The team didn’t play well in the last game, so this game will give them a chance to try to win back some confidence from the fans,” he said.

Phuket FC are now 7th in the table, with 44 points from 31 matches. They have no chance left for promotion, but are also well clear of the relegation zone. Air Force Utd are in 13th with 38 points from 30 matches.

After this game, Phuket FC will take a New Year’s break and then begin training on January 2 for their next home match, against Bangkok FC on Saturday, January 7.