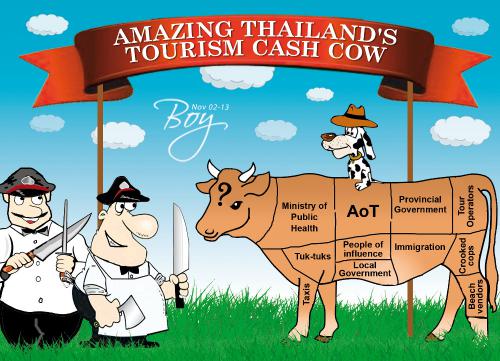 PHUKET: Reports of government plans to raise both arrival and departure taxes on foreign tourists reflect an almost complete lack of cohesion on tourism policy by government officials, and fly in the face of previous pronouncements that Thailand stands at the ready to become the “tourism hub” of the Asean region.

The proposed increases, a 100-baht hike in airport departure tax on international flights and a 500-baht “arrival” tax to help cover the costs of treating uninsured foreign tourists, need to be evaluated independently. The fact that they were put forward in the same week by different government ministries is likely to reinforce the perception abroad that Thailand’s reputation for hospitality is becoming increasingly eroded by greed and over-dependence on its premier cash cow: the tourism industry.

Some observers were quick to point out that the proposed increases, which still need to be approved by the relevant ministries, as well as the Cabinet, only account for a small percentage of increase in the cost of a holiday in Thailand.

The departure tax proposed by Airports of Thailand (AoT), which would rise from 700 to 800 baht on international flights and from 100 to 200 baht for domestic flights, is ostensibly justified by the need to improve services and facilities for passengers, such as the provision of free wireless and reimbursement for passengers affected by flight delays exceeding three hours. The expenses were not included in AoT’s original five-year capital expenditure plan for 2011 to 2015, or so the story goes.

How nice it must be to exist in a financial realm where planning oversights are so conveniently compensated for. According to respected industry analyst Bualuang Securities, the hike in price would increase the public company’s long-term core profit by 27 per cent and drive up short-term share prices dramatically. Under such circumstances it appears unlikely that the Civil Aviation Commission will reject the proposal, especially as those footing most of the bill to subsidize potential profits for AoT will be the all-too-familiar victims: foreign tourists and small-scale tourism industry operators.

As discouraging as the AoT increase might be for Phuket’s tourism industry, it probably would have slipped by with little notice had it not been proposed just days after the Ministry of Public Health put forward its amorphous plan to impose a 500-baht arrival tax to cover the cost of treating uninsured foreign tourists whose medical bills need to be absorbed by the Thai state.

There is simply no reason why Thai taxpayers and “quality tourists”, radically defined here as those who have enough sense to take out a travel insurance policy prior to arrival, should foot the bill for those who do not. This is an issue that needs to be urgently addressed in a systematic way, not bandied about as a potential new sluice gate into the seemingly endless, corruption-ridden trough of wasted taxpayer earnings, both Thai and foreign.

Phuket Opinion: The meter of madness