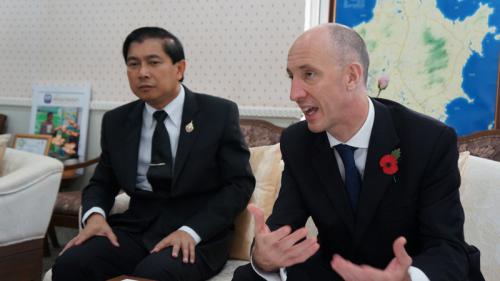 PHUKET: High-ranking local government officers in Phuket will start an English language and cross-cultural negotiation course this month as part of the ongoing cooperation between the United Kingdom and Thailand, said British Ambassador to Thailand Mark Kent.

The announcement of the course came after a closed-door meeting between Amb Kent and Phuket Governor Maitri Inthusut yesterday afternoon.

“The UK embassy will provide over 60 per cent of the expenses for the entire project and will organize the teachers and course content,” Governor Maitri said.

Also discussed at the meeting was the Coastal Water Safety Summit being developed by Phuket Honorary Consul Martin Carpenter and Gov Maitri.

“We are very honored to receive the governor’s support for boosting marine safety in Phuket,” Amb Kent said.

Asked if he had any concerns about the upcoming high season, Amb Kent said that he felt the Thai government was doing a good job of taking care of visitors.

“I think most people who come to Phuket have a very enjoyable time, and we want that to carry on,” he said.