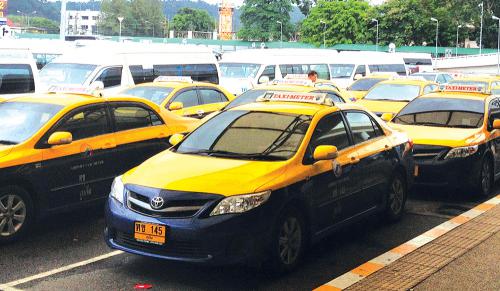 PHUKET: After landing at Phuket Airport on October 7, I passed all the scam businesses and made my way to the metered taxi stand.

I’ve used it for years and know that despite the word “metered” in the name, the price is fixed, about 550 baht to Patong.

But with the Department of Special Investigation (DSI) visits, it’s a new era. I asked the price to Patong. I was answered, “We only go by meter.” So far so good.

I told the staff that I wanted to go via Surin instead of over the dangerous mountain road in Kathu. They told me that it would be more expensive to go that way. I said fine.

Then I paid 100 baht surcharge and got a stamped receipt. This surcharge has been levied for years – legally or not, I don’t know.

Inside the taxi, the meter was on 50 baht. I asked why. No answer. 150 baht just to leave the airport.

No problem, I could afford it.

I told the driver the name of my hotel. He’d never heard of it. I said, “I can show you the way,” but he preferred to stop at his office near the airport to ask directions.

A woman came out to ask the hotel name. I said, “I will show him, just get me to Patong.” Pointing to the running meter, I said, “Let’s leave.” Then the boss came and asked about the hotel. I said, “The meter is running, let’s go now!”

“You are a crazy man,” was the only thing he said, several times. We took off. Before long, I told the driver that we had overshot the junction to Surin by several kilometers.

“Where are you going?” I asked him.

“I go Kathu way,” he answered.

“No, we go Kathu,” he answered with a dangerous look.

I asked him to call his boss and they argued for a long time before he made a u-turn.

He was very angry by this time and I realized the threat. Thinking of all the stabbed taxi customers in Thailand, I tried to stay calm.

When we arrived, I jumped out of the taxi and asked for a receipt. He just shook his head, “No have.”

The trip was 635 baht on the meter. I took a photo and gave him a 65-baht tip to ensure that I could walk out of my hotel later that day without getting beaten up.

Metered taxis seem like a good idea, if they drive the shortest way and don’t mess it all up with wrong directions and stopping at their office and so on.

Not giving a receipt sounds like a tax scam. How many trips do the owners actually report? Does anyone dare to ask?