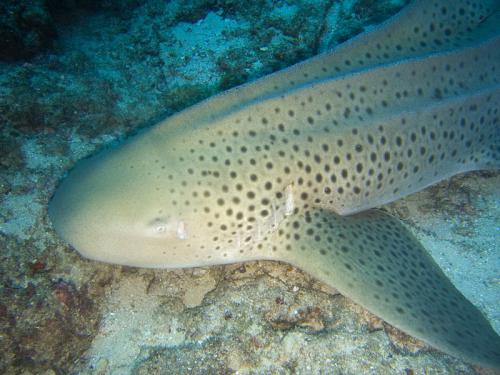 PHUKET: One of the largest projects ever designed to document the worrisome trend of declining shark sightings in Thailand was announced today in Phuket.

In the wake of professional diver testimonials showing a 95 per cent decrease in shark sightings at Thailand’s renowned dive destination the Similans, the founders UK NGO Shark Guardian have moved forward with the Thailand E-Shark Project, which will run from November 1 to April 30.

Brendon Sing and his wife Liz, founders of Shark Guardian, have been working in the dive industry in Thailand for over 10 years.

“Since we started our work, and even until recently, local Thai guides and expats working in the dive industry have continuously reported seeing fewer and fewer sharks,” Mr Sing said.

He added that people in the dive industry have reported seeing more and more fishing boats and trawlers in national parks.

“There are just fewer fish and less marine diversity, and it’s having a dramatic effect on the industry and their [dive professionals] livelihoods. However, it’s very hard to prove any of that,” Mr Sing explained to the Phuket Gazette.

Ahead of the launch of the Thailand E-shark Project, local dive industry figures were surveyed to gather testimonials about shark sightings at Koh Tao, Koh Phi Phi, Phuket, Koh Lanta and the Similans.

“Shark sightings are massively on the decline in the Similans. It looks like they’ve dropped by about 95 per cent since 2007,” Mr Sing said.

The Thailand E-shark Project, which will collect data from divers, snorkelers, fishermen, boaters, beach walkers and standup paddle boarders, is expected to support these startling claims.

Most recently, data collected by the international organization E-Shark was used to support the introduction of five species of sharks to the Convention of International Trade of Endangered Species (CITES) Appendix II in Bangkok earlier this year.

“The oceanic whitetip, scalloped hammerhead, great hammerhead, smooth hammerhead and the porbeagle shark are harvested in huge numbers for their valuable fins and, in some cases, meat. From now onwards, they will have to be traded with CITES permits and evidence will have to be provided that they are harvested sustainably and legally. These listings mark a milestone in the involvement of CITES in [the preservation of] marine species,” according to the CITES webpage.

Thailand E-Shark was announced at the opening of Phuket’s diving high season at Aqua Master in Chalong. The announcement was made to the large gathering of dive professionals, who are expected to lead the charge in documenting sightings. However, Mr Sing made it clear that everyone was invited to participate in the data collection.

Despite there being no way to monitor the reliability of the reports, those logging sightings will be asked to provide the time and exact location of the sighting to allow scientists to identify multiple sightings of the same shark.

“We are going to try to motivate dive centers to get involved. We want to make it fun, and keep the centers involved for the entire six months – the entire high season,” Mr Sing said.

“It really is a big community project, bringing everyone together for a single goal, and that is to see more sharks and get more protection for the marine parks.”

Those who want to join the project can register online by clicking here.