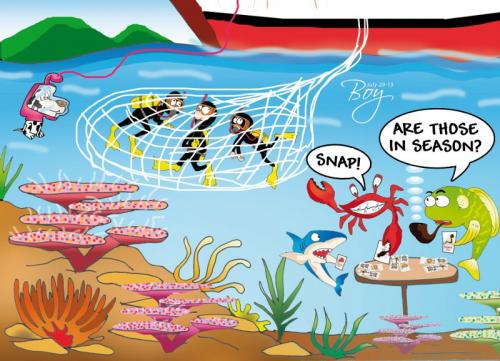 PHUKET: The recent discovery and subsequent removal of a large fishing net from the well-known dive site Shark Point (story here) is just the latest in a long series of indicators that the marine environment off Phuket is in dire straits.

Government researchers at the ‘National Parks and Protected Area Innovation Institute’ told a recent seminar that coral bleaching had affected as much as 70 per cent of the coral inside Phi Phi National Park. The institute’s research, conducted between 2009 and 2013, painted similarly bleak pictures of other Marine National Parks (story here) in the region.

Mankind’s understanding of the sea has increased in leaps and bounds over the past century. New technologies allow us to accurately map the sea floor, navigate through the foggiest of conditions, and do so many other things that the mariners of yore would never have dreamed possible.

We have also made huge progress in understanding marine life. One international effort involving more than 80 nations, The Census of Marine Life, is engaged in a 10-year scientific initiative to assess the diversity, distribution and abundance of all life in the oceans – from bacteria to the Giant Squid.

Sadly, all of these amazing tools and technologies have not helped much to prevent the continued degradation of the marine environment in many parts of the world. In fact, technology is probably speeding up the problem, rather than helping prevent it.

Improved mass-production techniques allow us to produce ever more, but increased production means more waste, and one of the many indicators that we have gone too far is the Great Pacific Garbage Patch, a huge gyre of pelagic debris, much of it plastic, that covers an area double the size of the continental United States by some estimates.

When it comes to marine environmental protection issues on Thailand’s Andaman coast, lots of finger-pointing goes on. Fishermen blame divers, and vice versa. Exotic fish collectors and smugglers also play a role, as do some corrupt officials who look the other way. In the few cases when arrests are made, the inevitable and irrelevant ‘excuse’ is: “Everybody’s gotta eat”.

Authorities assigned to protect our seas from illegal fishing and other damaging practices point out the colossal scale of the task compared with their meager budgets, equipment and human resources. Who can blame them? If police cannot enforce traffic laws here on land, how can we reasonably expect them to do better at sea?

It would be possible, at least in theory, to make some progress toward protection of the seas surrounding Southeast Asia, but that cannot happen without a fundamental change in mindset about the environment and one’s personal responsibility for it. Sadly, Thailand would appear to lag far behind some of her better educated neighbors in terms of the prospects for such a change.

Phuket Opinion: Saving swimmers by keeping them out of the sea