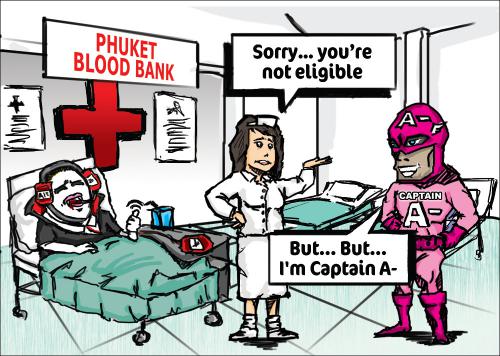 PHUKET: The sustained work of the Phuket Regional Blood Center (PRBC) in organizing blood donation drives that have saved countless lives over the years should be applauded. However, it might be time to reconsider some of the more restrictive criteria over who can donate blood when it is a matter of life and death.

Thanks to relatively recent advances in medical science, tremendous strides have been made in understanding how to transfuse this life-giving substance since our earliest, desperate forays into the field, which initially involved animal research and animal to human transfusions.

Fast forward to the new millennium and the science behind blood donation and transfusion is generally well understood and accepted, although how this potentially life-saving technique is performed and administered can vary widely country to country for a number of reasons, from religious and traditional beliefs to legal considerations.

Here in Phuket, the biggest challenge confronting the local blood bank is the lack of negative blood types relatively common to Caucasians, but extremely rare among Asians.

Over the past 20 years, many Phuket Gazette readers have read countless emergency appeals for donations of negative-type blood following accidents that befall visiting tourists and expats.

Often these appeals end well, with the island’s hospitals, the local media and the blood bank cooperating to find the true heroes: those willing to stop what they are doing at a moment’s notice to, quite literally, give the gift of life to save another.

Unfortunately, in the case of emergency patients with negative blood types, there have been cases when people have succumbed to their conditions simply because of a lack of suitable blood. It’s not that there weren’t people willing to give it, but that those who were didn’t qualify.

It is hard to imagine blood so ill-qualified in a life-or-death situation that it is better to let a patient die from massive blood loss than to take a chance on a patient who is a little too old to give blood, or is possibly a carrier of Mad Cow disease – loosely described as anyone who lived in the UK between 1980 and 1996 for a period of six months or more.

Furthermore, though the Red Cross is right to be protective of the health of older donors, it should consider raising the age limit on first-time donors, and in emergency cases where older donors are willing to accept potential health risks in order to help another, it should allow them to do so.

Phuket Opinion: Stiffer penalties needed for those going for gold