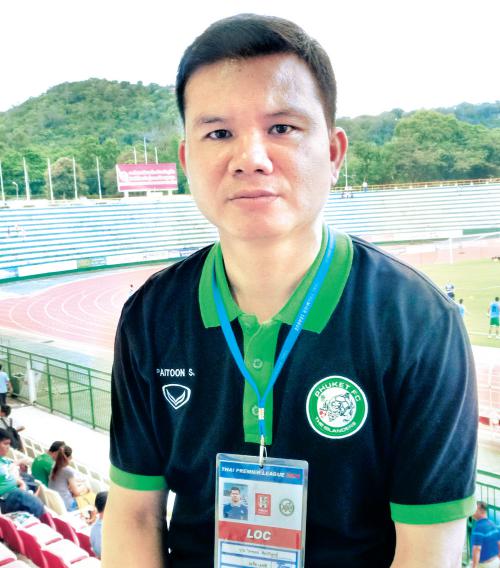 Paitoon Sillapavisut, 41, is a Nakhon Sri Thammarat native who graduated from Ramkhamhaeng University in Business Management. He has been the senior manager of the Phuket branch of Road Accident Victim Protection Co Ltd Since 1998.

Here, Mr Paitoon talks about what causes visitors to have motorcycle accidents on the island and suggests what measures should be taken to prevent them.

PHUKET: In the recent Seven Days of Danger road-safety campaign, there were five road deaths in Phuket (story here). Two of the people who died were foreigners riding motorcycles.

Foreigners here are much more likely to have accidents while riding motorbikes than driving cars.

There are several reasons for this, but the one I think is most within our control concerns the rental shops. They often only ask for a passport and don’t insist on seeing a valid driver’s licence.

Authorities in Phuket should crack down on this practice and make sure that every rental shop require a valid motorcycle driver’s licence before renting out a bike.

Neglecting to ask for a licence is the first ingredient in a recipe for disaster. It puts inexperienced people into traffic they probably don’t understand. The rules here are bound to be different than the rules in their countries – for instance, at home they may drive on the other side of the road. This can cause confusion while driving, especially when making turns.

We have heavy traffic and a lot of people who drive at high speeds. This raises the risk of accidents for inexperienced drivers who are unfamiliar with our roads. And that’s not to mention the many hills and curves which cause accidents even among people who are familiar with them.

Another contributing factor to foreigners’ accidents is the high number of rental shops here. There are motorcycle rental shops along the road at every tourist spot on the island, and at almost every beach.

Then, there is the mindset of tourists – they’re here to have a good time. Sometimes that means their common sense goes out the window. They might have an “anything goes” attitude which causes them to lose self-control, and to lose the concern they normally have for their safety and that of others.

They may drink and drive, and they may get in a group and start driving wildly, just for fun.

Even if they avoid hurting anyone during an accident, dealing with insurance issues could ruin their vacations.

Rental shops are required by law to insure each motorbike with insurance called “Road Accident Victim Protection”, or RVP. It costs the rental shop 320 baht per bike per year. RVP pays up to five million baht per accident.

One problem we have encountered with foreign claimants is time constraints. For example, they submit all the necessary documents, but need to fly home the following day. We can’t process the claims in one day. We need time to investigate the accident and make sure the motorcycle is covered. This has caused fights between tourists and insurance company staff.

Drivers should keep in mind that if they are at fault, RVP won’t cover damages, and they will likely have to pay for repairs out of their own pocket.

Even if they manage to avoid accidents, foreigners without driving credentials may still get in trouble with the law. If a policeman stops them, they could be arrested, which would not be a pleasant addition to their vacation.

I want foreigners who rent bikes without a license to remember that a split second can change their lives forever. What happens in that short moment could cause them to never go home to their loved ones, or prevent someone else from going home to his.