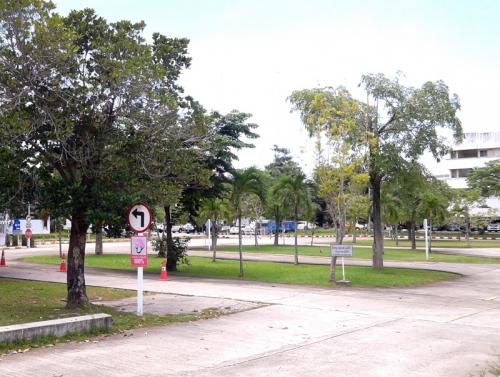 PHUKET: Every motorist I have ever met remembers the day he or she was issued a driver’s license and got behind the wheel… legally. My wife enjoyed that day only this week.

The joyous occasion came after months of trying to teach her to drive on the streets of Phuket, where we were slowly denied the opportunity of practicing away from the island’s notoriously dangerous traffic. We were banned from our chosen test tracks one by one.

At first, self-preservation guided our thoughts as we crossed off Thepkrasattri Road, the bypass road, anywhere near the busy coastal and beach areas that are flooded by tourists whizzing by at breakneck speed on their inaugural motor scooter flights.

We considered shopping mall car parks, then realized how silly we were being.

So we headed for the car park of the Phuket Land Transport Office (PLTO) itself, laughingly to discover that was where all the learner drivers in Phuket Town practiced on the weekends. The lovely guard allowed people in, and the weekends saw a slow procession of vehicles winding their way through the traffic islands and marked off lanes in the car park.

Then the guard told us the honeymoon was over; some big wig said no civilians were allowed to practice there anymore. So we tried somewhere closer to home: a quiet housing estate off Kwang Road, between Wichit and Chalong.

This, too, was short-lived. After two Sundays of slow meandering through the streets, a volatile farang exited his middle-income mansion and approached the car while my wife was driving slowly past his house.

She was alone in the vehicle with our two-year-old baby asleep in the safety seat. I was watching from the curb. I had opted to exit the vehicle so my wife could practice without the nervous tension of a back-seat driver in the front passenger seat.

The circumstances didn’t stop the man from opening the car door himself and confronting my wife to ask her, “What are you doing? This is my house.”

My wife pointed to me and explained she was learning to drive. “Well you can’t keep driving around here,” she was told.

So, without anywhere in Phuket to safely learn to drive, my wife headed off home to sunny Trang province, where within three weeks she has practiced enough to pass her test.

My best wishes go out to all other learner drivers in Phuket. I hope they have a “Trang” to call their own. They’re gonna need it.