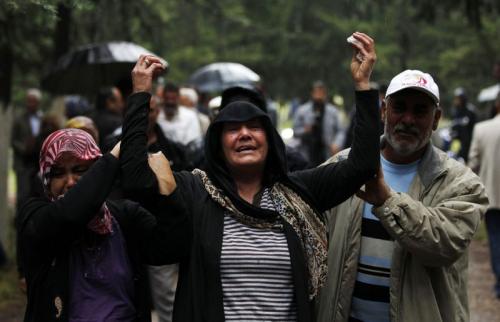 
Syrian refugees fear backlash in Turkey after bombings
Reuters / Phuket Gazette
PHUKET: Syrian refugees in Turkey say they fear a backlash after car bombings that killed 50 people and wounded many others over the weekend in a border town.

Turkey is home to some 400,000 refugees from the two-year civil war in Syria, and Prime Minister Tayyip Erdogan has emerged as one of the most vocal leaders in the region supporting the uprising against Syria’s Bashar al-Assad.

The bombings in the border town of Reyhanli have increased fears that Syria’s civil war is dragging in neighbouring states, despite renewed diplomatic moves to end it. Damascus has denied Turkish allegations it was involved in the blasts.

“We are putting our trust in God but our fear is that people will blame us for the bombings and will attack us. We have to protect ourselves,” said 75-year-old Mohammad Nuh, one of thousands of Syrian refugees living in Reyhanli.

“We haven’t been into the town centre since Saturday. Only out to the local shop. Other Syrians here won’t even leave the house,” said Nuh, who left Aleppo two months ago.

His grandson, Amr Nuh, 21, said he was out buying mobile phone credits when the blasts took place, and was seized by locals because he was Syrian. They held him and called the police who kept him overnight for questioning.

Since the attacks, some locals have turned their ire on the influx of Syrians in the town. Many have expressed anger over the policies of Erdogan, blaming his support of Assad’s opponents for bringing the war’s impact across the border.

Spontaneous demonstrations by angry young men chanting anti-Erdogan slogans have broken out. Syrian refugees have largely vanished from the streets, staying indoors for their safety.

We knew it would happen

A retired tailor who gave his name as Mehmet, 75, said anger was focused not at genuine civilian refugees but at rebel fighters who had taken advantage of hospitality in Turkey and were operating in the area, making it a target.

“We knew this bombing would happen. Even a 5-year-old would have known this was going to happen. There are going to be more,” said Mehmet, who said he was only a few hundred metres from one of the blasts when it happened.

“We do not know who most of these people are who come into our town. They leave at night and go fight over the border and then come back.”

Most of the local residents in this part of Turkey are ethnic Arabs and Sunni Muslims, like the majority of the Syrian refugees who have fled from the government of Assad, a member of the Alawite minority sect.

“A Syrian family lives there,” said Mehmet, pointing to an apartment. “It makes me sad: they are too scared even to come out now. I have nothing against these people. But the other people, we just don’t know who they are.”

Turkey has accused a group with links to Syrian intelligence of carrying out the car bombings.

“This incident is definitely linked to the (Syrian) regime,” Erdogan told reporters on Monday ahead of a trip to the United States. The bombings triggered a wave of anxiety, particularly along the 910 km border.

In Reyhanli, anger has been building for months as the Syrian war makes itself felt in the city. Turkish officials have urged people to keep calm.

NATO-member Turkey has fired back at Syrian government forces when mortars have landed on its soil, but despite its strong words has appeared reluctant to bring its considerable military might to bear directly in the conflict.

When Syrian refugees first entered Turkey in 2011, they were largely well received. But attitudes have soured.

“I blame the Turkish government for this mess. They should never have got involved in Syria … Now we are suffering because of it,” said 20-year-old student Hamdi.

Mustafa, a teacher, said: “We don’t want the Syrians here anymore. They can’t stay here. Whether we even wanted them or not, they can’t stay after this.”

In a survey of 7,600 people in eight EU member states, Pew Research Center found rapidly declining confidence in the European project and growing disagreements over key parts of it between Germany, France, Britain and other major nations, a dangerous combination that could splinter European unity.

“The prolonged economic crisis has created centrifugal forces that are pulling European public opinion apart, separating the French from the Germans and the Germans from everyone else,” the survey’s authors said.

“The effort over the past half century to create a more united Europe is now the principal casualty of the euro crisis. The European project now stands in disrepute across much of Europe,” they added.

The findings come at a time when many European policy makers were beginning to hope that the worst of the crisis was over, with confidence slowly returning to financial markets and high streets, even if growth and job prospects remain dire.

The headline finding of the survey, conducted between March 2 and 27, was the fact that the “favourability” of the EU has fallen by 15 percentage points over the past year, from 60 percent in 2012 to 45 percent now.

At the same time, the southern European nations of Spain, Italy and Greece have become increasingly estranged, and France is drifting their way too, leaving a big divide with Germany.

“No European country is becoming more dispirited and disillusioned faster than France,” the authors concluded, highlighting French citizens’ rapidly declining confidence in the economy, in President Francois Hollande’s leadership and in the country’s overall commitment to the EU.

What’s more – and it is an element that investors have often expressed concern about – the survey showed that French public opinion was now sharply at odds with Germany’s and more closely aligned with that of Italy, Greece and Spain.

“The French now have less faith in the European Union as an institution than do the Italians or the Spanish,” the survey found. “And the French, like their southern European compatriots, have lost confidence in their elected leader.”

Despite the fact that Germany, and Chancellor Angela Merkel in particular, are frequently portrayed negatively in countries that have received EU bailouts, respondents were largely positive about Berlin, considering it the most trustworthy of states.

Merkel remains by far the most popular head of government in Europe, with 74 percent of those polled saying she was doing a good job in the crisis, down from 80 percent in 2012. The least popular leaders were in the Czech Republic, Greece and Italy.

But perhaps the most difficult finding to resolve is that, while respondents in many southern European countries tend to think the economic situation is only going from bad to worse, those surveyed in Germany see circumstances improving.

Three-quarters of Germans described economic conditions as good, up from 63 percent in 2007, while in Spain only 4 percent said conditio