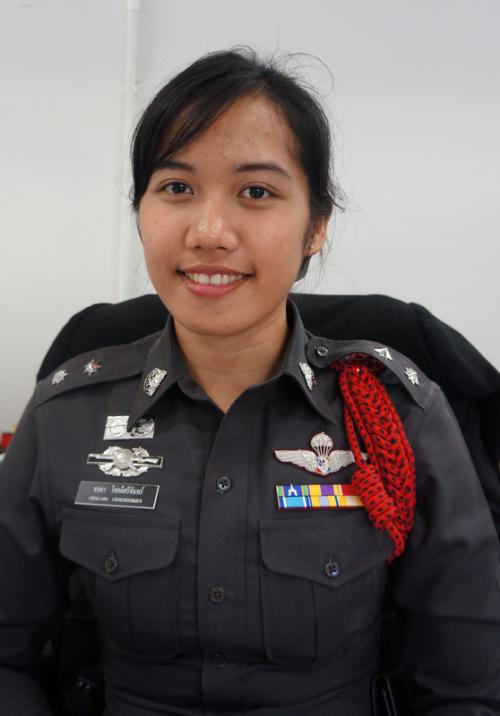 Chollada Chokdeesrijun, 23, graduated from the Royal Police Cadet Academy last year and started working at the Chalong Police Station on November 1. Originally from Bangkok, she and her family moved to Phang Nga when she was 13 years old.

Here Lt Chollada talks about why it is important to have women on the police force, and the challenges she has faced as one of the first Thai female officers.

PHUKET: One of the main issues with not having enough female officers on the force is that it is easier for female drug smugglers to operate in Phuket.

Male officers are not allowed to do frisk searches of female suspects. This often causes delays, as the officer has to look around for a woman who can search the suspect. With more female officers, we would be better able to crack down on drug smuggling.

Female officers are also essential to handling rape and sexual assault cases. They are more effective in dealing with these cases because female victims are usually more willing to talk with them. This has become increasingly important, as the number of these kinds of cases is on the rise.

Even though I can make these contributions, it has been very difficult to prove to male officers that I am just as capable as they are in preforming my duties. Being a police officer is a tough job that demands a lot of respect, and our society is not really open to females holding such a position.

In the law, it is written that everyone is equal. However, that is not the reality within our society. Even when women prove that we are able to do anything male officers do, it’s difficult for some of them to accept us.

To preserve our image as police officers, we have to act both tough and respectable at all times, both on and off duty.

When I first started working here, I had the feeling that some of my colleagues did not have any confidence in me. Maybe they thought I was there to make coffee and take care of them. However, since they have seen the quality of my work, I think they accept me as a fellow member of the team who can fulfill my responsibilities.

Still, I have to prove every day that I can do this job. I have to be self-disciplined and most of all, I have to control my temper.

I spent four years training for this, and the hardest part of my training was controlling my temper. My seniors would often try to get me to fly off, but as an officer of the law I can’t allow that to happen; I have to keep a cool head.

When I was growing up, I didn’t expect to become a police officer – I wanted to be an engineer. But when I saw that the Royal Police Cadet Academy had opened its gates to women for the first time, I wanted to join. It’s an honorable job, something my parents can be proud that I am doing.

I have changed a lot since becoming a police officer. Because of my position and the uniform I wear, people expect a lot from me. Part of my job is deciding when people are right and wrong, and because my decision will have repercussions on their lives and those of others, I have to be very certain and can’t make a mistake.

I know a lot of people don’t like the police, but I deeply believe in HM King Bhumibol Adulyadej, who said that if we fulfill our duties and abide by the law, our society will move forward. I do the best I can at my job.

I would like to thank Chalong Police Superintendent Krittapas Det-intarasorn, seniors officers and my other colleagues for recognizing me as an essential member of the team.