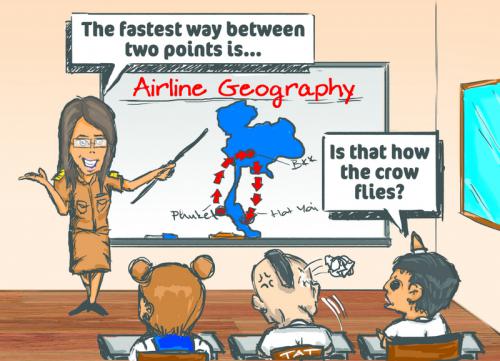 PHUKET: There are many different indices used to assess how developed a country is. Fortunately for Thailand, the state of the domestic aviation industry is not among them, because if it were, the country would not fare well in the ratings.

In many countries, regional carriers operating small turboprop commuter planes on scheduled routes in lean markets are an important segment of the overall air transport infrastructure.

In neighboring Malaysia, as just one example, Firefly continues to expand in leaps and bounds, having recently received the first of 20 new 72-seat ATR turboprop aircraft.

The carrier, which now uses turboprop planes exclusively, operates 15 domestic and 10 international routes, including several to resort destinations in Thailand. Having carried some 1.7 million customers last year, it is establishing both Kota Baru and Johor Baru as new hubs and plans to expand into Vietnam and Cambodia.

In sharp contrast, the dearth of regional commuter flights linking major population centers within Thailand is hard to explain, especially for a country that relies so heavily on tourism to generate revenue, has so many popular destinations with airports – and has such an abysmal road safety record.

The current lack of any direct flights linking the South’s two largest international airports, Phuket and Hat Yai, is just one case in point. Both are international airports serving large metropolitan areas, yet of the numerous carriers that have tried to operate the route, none have done so successfully.

Some, like Nok Air, failed because it chose aircraft too large and ran into load factor problems that probably could have been overcome by a better sales and marketing campaign. Phuket Air failed principally because of its safety record. Happy Air also had marketing problems, as well as reliability issues. The list goes on, but the recurrent theme is mismanagement, not lack of demand.

There are interesting parallels between the interminable political mess we find ourselves in and the sparsity of regional commuter flights in Thailand. First and foremost, everything in Thailand, it seems, must go through Bangkok. Having useful connections with the ruling elite there is also seen as a must for any hopeful start-up.

Airports of Thailand (AoT) is currently undertaking major expansions at several airports, including Phuket International. Sadly, they are so firmly cemented in a thoroughly “Bangkok-centric” style of thinking that little or no planning, it seems, has been done to help spur the growth of aviation services outside the capital. Such planning, should it ever be forthcoming, could go a long way to help keep Phuket hotels filled with tourists year-round.

Phuket Opinion: Forging a place for women on the force