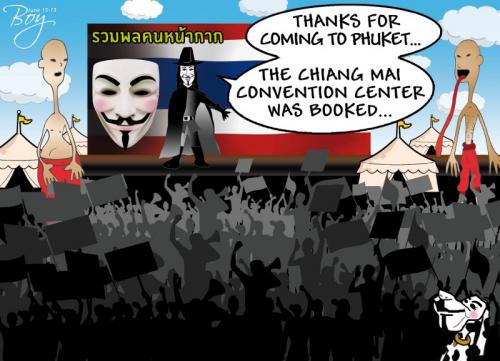 PHUKET: Recent protests over inflammatory comments made in Chiang Mai by controversial Deputy Prime Minister Plodprasop Suraswadi are just one small reflection of growing national unease with the administration of Yingluck Shinawatra.

In an address to the people of Chiang Mai, Deputy PM Plodprasop said the refusal of the people of Phuket to elect a Pheu Thai Party candidate would cost our island a chance to have an international convention and exhibition center (ICEC) of the type recently completed in the home province of the family of Thaksin and Yingluck Shinwatra.

Mr Plodprasop, or anyone else seeking to win friends and influence people, may consider refraining from intentionally insulting any person or constituency; it seldom ends well at election time.

The comments were probably intended not as an insult to the people of Phuket, but rather as a way of stirring up support for the Pheu Thai Party in its traditional power base. Nevertheless, as a veteran politician on the national stage, Mr Plodprasop should have known better. We already have an ongoing, deadly insurgency in the Deep South; do we really need our leaders throwing more fuel on the fire of regional distrust?

The Pheu Thai Party’s political opponents, themselves now donning masks, are looking to put a face on the enemy. PM Yingluck, the nation’s first female premier, seems to enjoy a sort of teflon coating that harkens back to the days of US President Ronald Reagan.

Thus Mr Plodprasop’s comments – though hardly the first insult meted out by the current Cabinet, and not the first related to the ICEC – could not have come at a more ill-advised time for him and his party.

The now-defunct ICEC project, which had funding under the previous Democrat Party-led government, could only have been derailed through failure in the environmental impact assessment (EIA) process, conducted by the Office of Natural Resources and Environmental Policy and Planning (ONEP).

ONEP falls under the Cabinet’s National Committee on the Environment, chaired by none other than PM Yingluck. A primary reason given for the proposal’s failure was that part of the project area was alleged to encroach on a sea turtle nesting site – though there have been no reports of nesting there in over a decade.

Other, far more credible excuses in the ONEP’s comments on the cancellation of the ICEC were related to the proposed project’s “long-term economic viability”.

Phuket’s booming private sector is planning to build a new mega-project with convention facilities near Central Festival. This is a far better location, literally more central than Tah Chat Chai, which should remain in its existing natural state. Who knows, maybe at some point in the future it will once again be a viable site for sea turtles to lay their eggs, much to the delight, we’re sure, of Pheua Thai.