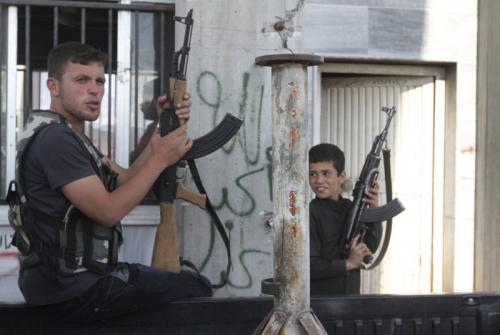 PHUKET: President Barack Obama has authorized sending U.S. weapons to Syrian rebels for the first time, a U.S. official said on Thursday after the White House said it has proof that the Syrian government had used chemical weapons against opposition forces fighting to overthrow President Bashar al-Assad.

The U.S. decision came as Assad’s surging forces and their Lebanese Hezbollah allies turned their guns on the north, fighting near the northern city of Aleppo and bombarding the central city of Homs after having seized the initiative by winning the open backing of Hezbollah last month and capturing the strategic town of Qusair last week.

The White House said Washington would provide “direct military support” to the opposition but did not specify whether it would include lethal aid, which would mark a reversal of Obama’s resistance to arming the rebels. But the U.S. official, speaking on condition of anonymity, said the package would include weapons.

The arrival of thousands of seasoned, Iran-backed Hezbollah Shi’ite fighters to help Assad combat the mainly Sunni rebellion has shifted momentum in the two-year-old war, which the United Nations said on Thursday had killed at least 93,000 people.

U.S. and European officials anxious about the rapid change are meeting the commander of the main rebel fighting force, the Free Syrian Army, on Friday in Turkey. FSA chief Salim Idriss is expected to plead urgently for more help.

Obama has been more cautious than Britain and France, which forced the European Union this month to lift an embargo that had blocked weapons for the rebels.

After months of investigation, the White House on Thursday laid out its conclusions that chemical weapons were used by Assad’s forces but stopped short of threatening specific actions in response to what Obama said would be a “game changer” for Washington’s handling of the conflict.

“Our intelligence community assesses that the Assad regime has used chemical weapons, including the nerve agent sarin, on a small scale against the opposition multiple times in the last year,” Rhodes told reporters.

He said the U.S. intelligence community has high confidence in the assessment and estimated that 100 to 150 people had died from detected chemical weapons attacks in Syria to date.

The U.S. announcement followed deliberations between Obama and his national security aides as pressure mounted at home and abroad for more forceful action on the Syria conflict, including a sharp critique from former President Bill Clinton.

Rhodes said the U.S. military assistance to the rebels would be different in “both scope and scale” from what had been authorized before, which included non-lethal equipment such as night-vision goggles and body armour.

Western governments that predicted months ago that Assad would soon fall now believe that support from Tehran and Hezbollah are giving him the upper hand. But they also worry that sending arms to rebel fighters could empower Sunni Islamist insurgents who have pledged their loyalty to al Qaeda.

While Britain and France have yet to announce their own decisions to start arming the rebels, their diplomats have been making the case that the best way to counter both threats is to beef up support for Idriss’ mainstream rebel force.

Strengthening the FSA with money, weapons and ammunition, they argue, would help combat Assad and also provide a counterweight among the rebels to al Qaeda-linked groups.

France in particular has developed good relations with Idriss while providing funds and non-lethal support, and seems eager to send him military aid.

Among those whose comments put pressure on Obama to act was one of his predecessors, Bill Clinton.

“The only question is: now that the Russians, the Iranians and Hezbollah are in there head over heels … should we try to do something to try to slow their gains and rebalance the power so that these rebel groups have a decent chance to prevail,” the former president was quoted by newspaper Politico as saying.

Assad’s government says its next move will be to recapture Aleppo in the north, Syria’s biggest city and commercial hub, which has been divided since last year when advancing rebels seized most of the countryside around it.

Syrian state media have been touting plans for “Northern Storm,” a looming campaign to recapture the rebel-held north.

The United Nations, which raised its death toll for the war to 93,000 on Thursday, said it was concerned about the fate of residents if a new offensive is launched.

“All of the reports I’m receiving are of augmentation of resources and forces (for an Aleppo offensive) on the part of the government,” U.N. Human Rights Commissioner Navi Pillay told Reuters Television.

Assad’s army appears to be massing some troops in its footholds in Aleppo province, particularly in Shi’ite areas such as the enclaves of Nubel and Zahra, although some opposition activists say the government may be exaggerating the extent of its offensive to intimidate rebel supporters.

Activists reported fighting in the area around Aleppo on Thursday, especially near an airport that rebels have been trying to capture. The government has also launched an offensive in Homs, the closest big city to its last victory in Qusair and one of the last major rebel strongholds in the country’s centre.

“There was a fourth day of escalations today on the besieged neighbourhoods of Homs’ old city. Early in the morning there were two air strikes … followed by artillery and mortar shelling,” said Jad, an activist from Homs speaking via Skype.

Ahmed al-Ahmed, an activist in Aleppo, said the government’s reinforcements in the north were just a distraction from Homs.

“They’ve turned the world’s attention to watching northern Aleppo and fearing an attack and massacres as happened to our people in Qusair, to get us to forget Homs which is the decisive battle.”

Hezbollah’s participation has deepened the sectarian character of the war, with Assad, a member of the Alawite offshoot of Shi’ite Islam, backed by Shi’ite Iran and Hezbollah, while Sunni-ruled Arab states and Turkey back the rebels.

The 7th century rift between Sunni and Shi’ite Islam has fuelled violence across the Middle East in recent decades, including the sectarian bloodletting unleashed in Iraq since the 2003 U.S. invasion and the Lebanese civil war of 1975 to 1990.

Leading Sunni Muslim clerics met in Cairo on Thursday and issued a call to jihad against Assad and his allies on Thursday, condemning the conflict as a “war on Islam”.