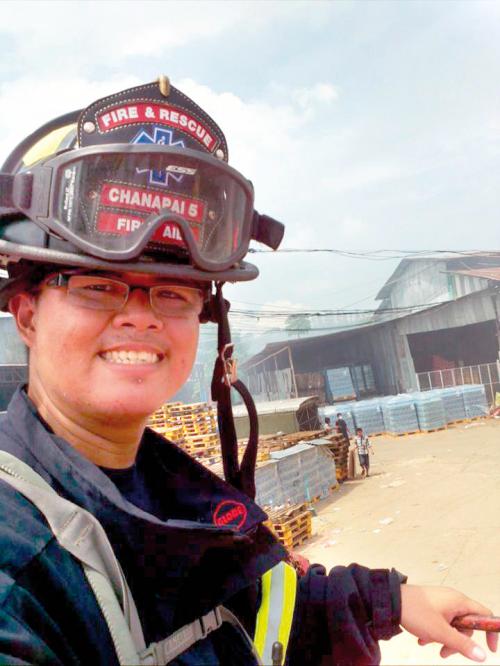 Here, he explains what is needed to save the lives of tourists, residents and firefighters when combating blazes in Phuket.

PHUKET: We need better quality equipment to save people’s lives and the lives of firefighters.

Last year, I was a volunteer with the firefighting team at the Lee Gardens Plaza Hotel [which caught fire after a car bomb detonated] in Haad Yai. We did our best, but people died. This memory still haunts me today. I was also among the many firefighters who fought the blaze at SuperCheap. I spent nine hours on the job there (story here).

The firefighting equipment we had to use when battling these blazes, as well as countless others, wasn’t very good. We need better personal protection equipment, such as self-contained breathing apparatuses, firefighting suits and radios that can handle high temperatures and naked flames.

I would like to see every Phuket government authority check the fire station in their area. They will see that some equipment is very substandard, very old.

Senior officials should talk to firefighters and ask them whether the equipment they have is good enough. We need to have high-quality equipment at the ready so that we can fight any kind of fire on the island at any time.

We do serious work. We risk our lives to save people. Without having the right quality equipment, we risk our lives and the lives of those depending on us before we even start fighting a fire.

In other countries, such as the United States, firefighters replace their equipment every 10 years. They have very high-quality equipment. I wish there was a similar mentality here.

As more and more people come to Phuket to live, a lot more houses are being built on the island – and most fires start in houses. The top three fire starters are electrical short circuits, candles and rice heaters.

One thing that amazes me is that many people use a wire to bypass the house’s main supply fuse.

This is very dangerous. People use the wire because it is cheaper than replacing the main fuse every time the power supply spikes, which happens all the time in Phuket.

What makes the wire dangerous is that it can become very hot when it carries a high charge of electricity, which can then start a fire.

It seems that people forget that safety must come first.

Similarly, cheap power boards that are not fitted with fuses can also easily start fires. These cheap power boards are available at many local markets, despite the fact that they don’t meet the legal standards set by the Thai Industrial Standards Institute.

If you really need to use a power board, please, at least use one with a fuse installed inside. It will cut out when there is too much electrical current and prevent a fire from starting.

If you have a fire that you cannot control, call the fire department immediately at 1129 or the police on 191 – or 1669 if anyone has been injured.