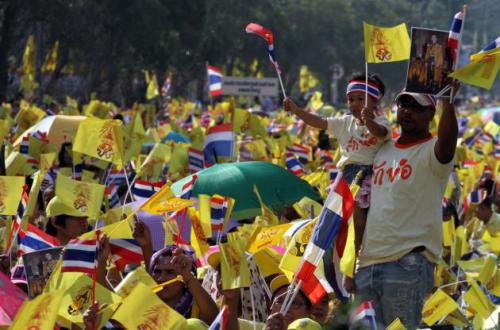 
HM issues call for unity
The Nation / Phuket Gazette
PHUKET: His Majesty King Bhumibol Adulyadej yesterday called on all Thais to carry out their duties for the benefit of their homeland and ensure its security.

In his birthday speech, His Majesty said Thailand had maintained happiness due to unity and because of people who had done their duty for public benefit.

“Thais should be aware of this and be determined to perform their duty for the benefit of the public – which is stability and security of the country,” the King said.

Millions of Thais were glued to their TV screens to listen to the live broadcast, while tens of thousands of people gathered along Phetkasem Road in Prachuap Khiri Khan’s Hua Hin district to chant “Long Live the King” as the royal motorcade drove past.

His Majesty left Piumsuk Villa, travelled along a portion of Phetkasem Road, and arrived at Rajapracha Samakhom Pavilion of Klai Kangwon Palace at around 10.30am. It is rare for the King to grant audience on his birthday outside the capital. Some of his well-wishers were seen shedding tears of delight as they caught a glimpse of their much-beloved King.

His Majesty, now 86, is the world’s longest-reigning monarch and has worked tirelessly for his people throughout his reign. This devotion has earned him the respect and adoration of people, as evidenced by the crowds in Hua Hin yesterday. Some people even travelled from as far as Yala, the southernmost province.

The King granted audience to senior government officials and top military officers at Rajapracha Samakhom Pavilion. Also present were other members of the Royal Family, whose best wishes for the King were delivered in a speech by HRH Crown Prince Maha Vajiralongkorn.

Prime Minister Yingluck Shinawatra then delivered a speech wishing the King a happy birthday on behalf of government officials, soldiers and the people, while Parliament President Somsak Kiatsuranont did the same on behalf of parliamentarians.

Supreme Commander General Thanasak Patimaprakorn then led military officers in taking an oath of allegiance to His Majesty.

The King thanked his well-wishers and urged his people to perform their duties and work together for the good of the country. The King also wished his people happiness and prosperity.

After the ceremony was completed, His Majesty left the pavilion and returned to Piamsuk Villa.

The confrontations between anti-government protesters and the administration have been halted temporarily for His Majesty’s birthday. Loyal subjects gave alms to monks, made merit and joined various activities to celebrate the occasion.

On Twitter, many users said they were tearful watching the ceremony and hearing the King’s speech.

A foreigner with the Twitter account name @pvdb64 posted, “He is still ‘the’ light in dark times. He shows all ‘the’ simple essence of life.” Another user @Wimuttipage said, “Today’s timeline is really peaceful. It’d be good if every day is like this.”

On Facebook, a lot of Thai users shared pictures and stories or messages wishing the King.

Meanwhile, many Thais shared pictures of them with their father, as HM the King’s Birthday is also marked as Father’s Day in Thailand.

At Democracy Monument, the main rally site of the anti-government protesters, thousands of people gathered to show respect for the King.

Suthep said yesterday that the truce between the protesters and the government would end today. “[Yesterday] is a day that Thai people nationwide believe is an auspicious day,” Suthep said after watching the King’s speech. “[Today] the people’s movement will continue to eradicate the Thaksin regime from Thailand.”


After truce to honour the King, political battle set to resume today
The Nation / Phuket Gazette
PHUKET: Confrontation between the government of Prime Minister Yingluck Shinawatra and protesters led by veteran politician Suthep Thaugsuban appeared set to resume today, as support for both sides was being mobilised yesterday.

After a truce reached in respect of His Majesty the King for the royal birthday yesterday, both sides were preparing for a resumption of their confrontation.

More protesters from the provinces, particularly from the South, will travel to Bangkok today to take part in the street demonstrations, according to some protest supporters. Also, red-shirt supporters will hold a pro-government rally in Ayutthaya next week, according to a red-shirt leader.

The government’s Centre for the Administration of Peace and Order (CAPO) convened yesterday afternoon to assess the situation and prepare for coping with renewed demonstrations, Interior Minister Charupong Ruangsuwan said.

Nipat said before the meeting that the situation remained fluid as the protesters planned to continue with their street rallies. “We have to prepare for the new moves,” he said.

In Phuket, local protest leader Amnuay Kumban said that while a parallel rally would be resumed in the island province, a “considerably large number” of new protesters would be joining the anti-government demonstration in Bangkok. He said that from today, volunteers would be asked to sign up for the Bangkok protest.

More protesters are also expected to arrive from other southern provinces, such as Nakhon Si Thammarat and Songkhla, according to local leaders and sympathisers. They will mainly travel by train and bus to the capital.

In Songkhla, security guards have been trained to provide safety for the protesters in Bangkok, according to Chalee Noppawong, director of a local radio station who has raised funds for protesters from the province. He said that from today, new protesters would begin travelling to Bangkok, mostly by bus.

He said the red shirts would express their stand that they would fight to the end to defend the government and Parliament from being toppled by Suthep.

Weng said he expected that tens of thousands of red shirts would join the demonstration after their leaders decided not to rally in Bangkok to avoid confrontation with the anti-government side.

He said Suthep was following in the footsteps of Sondhi Limthongkul, a former leader of the yellow-shirt People’s Alliance for Democracy. Weng warned Suthep against attempting to seize Suvarnabhumi Airport as Sondhi did when he led protesters to demonstrate against the People Power go