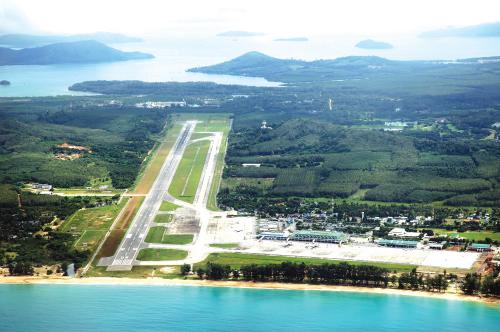 PHUKET: Phuket is an international tourist destination – few can argue differently. Islanders may whine that it isn’t what it used to be, but even they are likely to admit that one of the benefits of progress is having an international airport, with international standards.

The airport does meet standards, doesn’t it?

World travellers and even domestic puddle jumpers have some basic hopes for an airport, such as WiFi, helpful staffers at information and aircraft that depart.

Recently a friend had a 4am international flight, and I – being the gentleman I so rarely am – offered to scoot on up to the airport to send her off.

At this wee morning hour Terminal 1 was delightfully empty. We scanned the monitors for her airline: Nothing. We double-checked the ticket on her mobile. It confirmed: Terminal 1.

A nice staffer shook his head after looking at the phone and pointed us to the information booth with a genuine Thai smile – the kind that reminds you why millions flock to this country of hospitality.

The lady at the booth spoke reasonable English, and explained that the check-in for the flight had been moved to Terminal 2, and pointed us in the right direction. Terminal 2 was the place to be.

The only flight on my friend’s airline was leaving 15 minutes earlier than her scheduled one to a different destination, and between us and the answer to what was going on was a sea of wildly dressed Chinese tourists mobbed around the check-in.

We queued up. About 20 minutes later, an attendant clearly confused by our presence said, “I’m sorry, your flight was cancelled.”

It was explained that passengers should always check to ensure flights are not delayed or cancelled before departing for the airport. The message obviously hadn’t made it to the Terminal 1 information desk.

Two other passengers for the flight stood with us in the quickly-emptying Terminal 2.

The manager was called. He seemed baffled, but quickly overcame his surprise that people who paid for flights would expect to be able to fly.

Working with a laptop, he was able to swing last minute tickets that allowed all three passengers to make their connections in Shianghai.

All was done and dusted, and my friend was off. Phuket International Airport had buckled down and made it happen.

Walking out past the information desk, toward the sliding doors opening and closing, like the jaws of Phuket, I had to give it to the airport – at least it had WiFi.

Phuket Opinion: Creating a family for the ill far from home