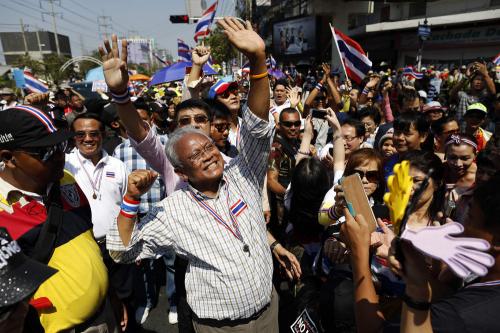 Thailand Election Special – How did we end up here? From Thaksin to today
Reuters / Phuket Gazette

PHUKET: Yingluck Shinawatra’s journey from political nobody to prime minister was breathtakingly swift. Her premiership’s descent into crisis has been just as rapid.

A political neophyte when she took office in 2011, the 46-year-old former business executive surprised many observers by steadying Thailand after years of often bloody political unrest.

Then she leaned over and pushed a button marked:

Behind Thailand’s lurch into its worst crisis in years was a disastrous intervention by Yingluck’s billionaire brother Thaksin, who was deposed in a 2006 military coup and now lives abroad to escape a corruption conviction.

Thaksin’s meddling turned a bill that would have freed ordinary Thais charged with protest-related crimes into a controversial wider amnesty for politicians such as himself, say senior members of Yingluck’s ruling Puea Thai Party.

A Reuters reconstruction, based on interviews with senior Puea Thai members and its “red shirt” allies, reveals how Thaksin’s intervention shattered two years of relative calm.

It also highlights how quickly political missteps can spiral into violence in Thailand, a warning sign ahead of a general election on Sunday that protesters have vowed to disrupt.

On one side is Thaksin and his younger sister Yingluck. Thaksin redrew the political map by courting rural voters in the north and northeast to gain an unbeatable electoral mandate that he then used to advance the interests of major companies, including his own. Thaksin-backed parties have convincingly won every general election since 2001.

On the other are the traditional Bangkok elites threatened by his meteoric rise, mainly the military, palace and bureaucracy, who see Thaksin as corrupt and his sister as his puppet.

Let’s push this through

Thaksin once famously described Yingluck as a “clone” who could make decisions on his behalf. Her party’s election slogan was “Thaksin thinks, Puea Thai acts”.

But after her landslide victory in July 2011, Thailand’s first female prime minister often set her own agenda, say analysts. She refused to reshuffle her Cabinet on Thaksin’s demand, and deployed her formidable charm to soothe relations with her divisive brother’s opponents in the establishment, particularly the military that had removed him from office.

The previous six years of unrest, which culminated in a military crackdown on Thaksin’s red-shirted supporters that killed 91 people in 2010, began to fade.

But the self-exiled Thaksin wanted to come home, and would not take no for an answer.

The vehicle for his return would be a draft bill that sailed through the Puea Thai-majority parliament last August. It would grant amnesties to protesters – but not leaders – charged and jailed in waves of unrest between 2006 and 2011.

A parliamentary scrutiny committee, also dominated by Puea Thai and its coalition allies, passed a revised draft of the bill on October 18.

The amnesty now extended to murder charges laid against former Democrat Prime Minister Abhisit Vejjajiva and his deputy, Suthep Thaugsuban, for ordering the 2010 crackdown. Abhisit led an unelected government for nearly three years after a pro-Thaksin administration was removed from office by the courts in 2008.

It also quashed hundreds of corruption cases and nullified the two-year jail sentence against Thaksin, allowing the return of $1.4 billion of his seized wealth – and a ticket back to Thailand.

Yingluck had reservations about the blanket amnesty, particularly about dropping the charges against Abhisit and Suthep, said her chief of staff Suranand Vejjajiva. “But in the end the MPs agreed, ‘Let’s push this through’,” he said.

The revised bill electrified Thaksin’s opponents and split his supporters. Leaders of the United Front for Democracy Against Dictatorship (UDD), a pro-government red shirt group, soon made public their anger with the party, seeing the new bill’s forgiveness of Abhisit and Suthep as a denial of justice for slain protesters. At the same time, small protests by Thaksin’s opponents began gathering steam.

But Suranand denied the MPs were coerced. “No one put a gun to their head and said, ‘You have to vote’,” he said.

Even so, many Puea Thai insiders feared Thaksin and his sister were blind to the growing crisis, underestimating the ability of his enemies to exploit public anger against the bill, said the senior party member.

At 4am on November 1, a buzzer rang through the hall of Thailand’s House of Representatives. After 19 hours and the abstention of the Democrats, bleary-eyed MPs unanimously passed the amnesty bill.

Protests against the bill, now headed for the senate, dramatically picked up. On Monday November 4, thousands of largely middle class Bangkokians gathered sporting Thai flag paraphernalia and whistles. Leading the pack was Suthep.

Faced with public outrage, Yingluck quickly ordered the bill to be pulled from the Senate. Her advisors now spin this as proof that she listens to the public and admits her mistakes, and shift the blame for the bill onto Puea Thai and its MPs.

“As a political party, we didn’t anticipate the very negative feedback from the public,” Noppadon Pattama, a Puea Thai strategist who advises both Thaksin and Yingluck, told Reuters.

The aborted bill provided Yingluck’s long-dormant enemies with the ammunition they needed. On November 12, Suthep resigned from parliament along with eight other Democrat MPs. The protests began their evolution into an uprising against, first, the “Thaksin regime”, and then Thailand’s system of electoral democracy itself.

“Once they were participating in the rallies against Thaksin, people who were against the bill became people against the system,” the Puea Thai MP told Reuters. “They got their critical mass and snowball effect.”

Jatuporn Prompan, a UDD leader and senior Puea Thai member, said he could see that Suthep and other establishment figures had long been planning a fresh uprising. He warned party leaders that the amnesty bill was just the trigger they needed.

“Suthep Thaugsuban and his team took two years to prepare for this to happen,” Jatuporn told Reuters. “He was preparing with the support of a network of elite bureaucrats.”

The protests unleashed by the aborted bill have added to a perfect storm of crisis for Yingluck, who has been a caretaker prime minister – with limited powers – since dissolving parliament on December 9 to call a snap election.