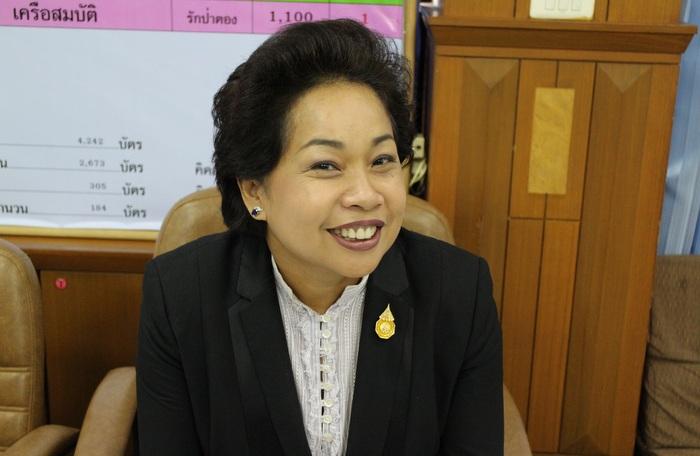 Chalermluck Kebsup is a native of Phuket and has served as the mayor of Patong since May 2014. She graduated with a bachelor’s degree in Law at Ramkhamhaeng University and received her master’s in Political Science at Sukhothai Thammathirat Open University.

Here she talks about the problems Patong faces due to the limited availability of area for development and how to utilize the land to its greatest potential.

PHUKET: Currently, Phuket has a Building Control Act that limits the height of buildings in different zones around the city, including Patong. In addition, the central government also has many specific restrictions about buildings in the area.

Due to this, it is difficult to accommodate the growing population and tourist community in Patong. Owners are forced to build outwards instead of upwards, taking up more land and reducing the amount of natural foliage. This eventually yields many environmental problems, such as flooding.

The Department of Public Works and Town and Country Planning has a very intricate colored zoning system throughout the island that determines the density, height and type of buildings, if any, that can be built.

Due to the economy, the real estate market and height restrictions, the current limitations are unsuitable.

So many people purchase land – which has risen from 100,000 baht per rai, to more that 200 million baht per rai – and expect to be able to build large resorts and hotels on them. Currently, buildings in Patong are restricted to a height between 12 and 23 meters and I am constantly dealing with people who are trying to break the law and build high-rises.

The municipality is unable to extend the 23-meter height restriction on its own, even though we want to see the land in Patong used to its greatest potential. Each government office has to adhere to certain restrictions in regards to allowing people to build on the land, including those by the Ministry of Natural Resources and Environment, which oversees height restrictions and zoning regulations.

Allowing people to build taller buildings will not only accommodate the growing population, but will provide more green zones in the area by not using the entirety of the land purchased for construction. This will leave some room for trees and nature to grow, which will help in cooling down the area and also prevent flooding.

Because it is a sensitive subject and many government offices – including those in the central government – have so many restrictions, it is difficult to change the law or make changes to policies. As of now, the former laws implemented in 2010 remain in place, making it difficult to remove and manage illegal buildings.

As most people can tell quite easily, many buildings in Patong – many of which are old – are illegal. The best course of action at this point is to control the newer buildings and projects and make sure that they are following all the laws, including the Building Control Act.

I plan on holding a meeting with all relevant officials to go over the current laws and restrictions and to table ideas that can help move Patong’s growth forward.

Until then, I will ensure that all buildings and owners are following the current laws, and that those who are will not will face consequences under the law.

Ministry of Farang Affairs: If no one sees, it didn’t happen