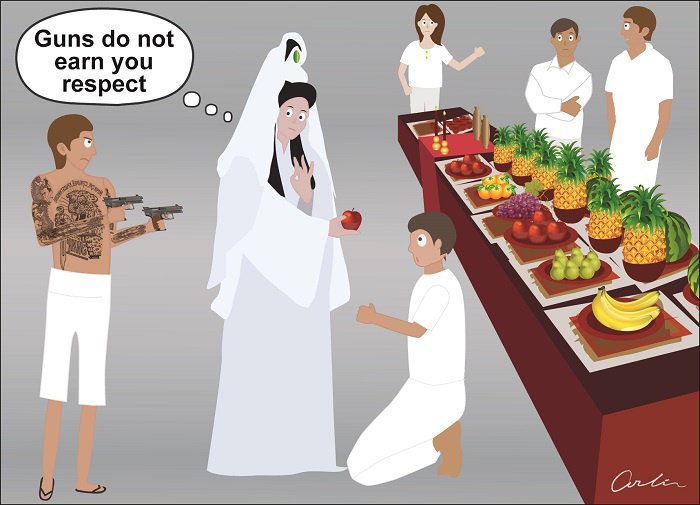 PHUKET: The tragic shooting of a 15-year-old boy during the closing ceremony of this year’s Phuket Vegetarian Festival is yet another brutal reminder that the island’s increasing urbanization is having a dire effect on the cornerstone of any successful society: the family unit.

The on-going investigation into the shooting of Thanakij Sawirum, who was apparently caught in the crossfire of two rival gangs, also reveals that not only is gang activity prevalent in Phuket, but that the authorities’ efforts to keep firearms out of the hands of the general public, including minors, continue to fail abysmally.

Saphan Hin, where the murder took place, has long been the island’s hotbed of gang activity. This is hardly surprising. As Phuket’s largest public park, it hosts an almost endless series of large public events, from the Songkran water throwing chaos and the Vegetarian “Festival” mayhem to motor racing spectacles and many more that attract untold thousands of people from across the island, not to mention visiting tourists.

As a public park, the sale of alcohol is technically forbidden. However, the reality is that cheap alcohol is readily available and there are few places on the island where more drinking takes place – not to mention all sorts of other drug consumption.

Responsible parents know the park is relatively safe during daylight hours, but that their children’s safety there inevitably falls after dusk. This is especially true for teens and young adults with raging hormones and limited experience in how to control themselves while under the influence.

We respect the religious beliefs of the many island residents who hold as sacred the rites associated with the Vegetarian Festival. But from a more secular perspective, parents will now have to think much longer and harder before allowing their teenagers to join the closing ceremonies of that event next year. Having so many people together in so many different psychological states creates the perfect storm for dangerous confrontations to arise.

Yet many of the teens involved in this tragedy were not only there unaccompanied by adults, but riding around in packs on motorbikes, armed with loaded pistols. Though police are actively doing their best, the front line in the battle against gang violence and to ensure children are not caught in the crossfire comes down to parents.

Famed American pioneer Elizabeth Stone once said: “Making the decision to have a child is momentous. It is to decide forever to have your heart go walking around outside your body.”

We plead with all parents to take those words to heart, because we can imagine no worse heartbreak than losing a child.

The Vegetarian Festival is meant to be a ritual of communal purification. To allow even a single youth to lose his or her life in this way is the greatest disrespect we could show to the countless ancestors whose sacrifices gave us the incredible gift of consciousness in these most interesting, but precarious, times.

Opinion: Tourism to the stars

Phuket Challenge: stickk to no bags for a week