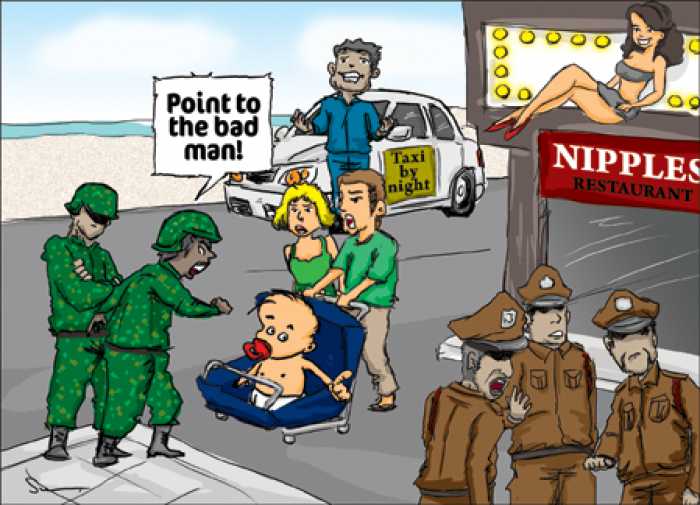 PHUKET: The foreign family with their two young children being subjected to a military-clad scare during a raid on the illegal taxi they hired is unfortunate (story here), but efforts by police to rid the island of “black plate” taxis still deserve full public support.

Like many other tourism-tarnishing incidents, this one involved tourists travelling on the “mafia mile” between Karon and Patong.

Unfortunately, and without the family’s knowledge, the taxi arranged for them by a hotel security guard in Karon was unlicensed. This fact was noticed by authorities somewhere along the way, resulting in the vehicle being surrounded by heavily armed police when it reached its destination in Patong.

As is often the case in incidents involving visitors, this was one that should have been handled more delicately by the local police who, despite their deployment to Patong, the island’s largest tourist area, are not well known for language or public relations skills.

Again unfortunately for these particular visitors, no English-speaking Tourist Police Volunteers were on hand to assist. But the language deficiency aside, the arresting officers should have found some way to convey to the family that they were not at fault, and that their co-operation in serving as witnesses against the illegal driver would help ensure the safety of others.

The police have defended their actions, insisting it was not possible to make translators available on short notice. That is a reasonable claim, but permitting the father to sign documents he could not understand, as has been alleged, is unacceptable.

While It makes sense to have resort staff assist visitors to discern between legal and illegal taxis, it would be better if such staff, in this case “security guards”, were themselves capable of making the distinction.

The fact that this was a black-plate taxi from Karon getting busted in Patong, suggests that there is still some way to go before Phuket enjoys legally-registered vehicles and drivers – only.

Inferences that the family were to blame for failing to exercise “due diligence” are unacceptable. This family chose Phuket as their holiday destination despite the imposition of martial law and travel warnings issued by many foreign governments. Phuket needs more visitors like them, especially at this time of year.

Anyone who has ever gone globetrotting with children knows what a trying experience it can be. For them to be inconvenienced in this way is highly regrettable because there has probably never been a better time for foreign families to visit Phuket than now.

In the end, with the ordeal behind them, the family was able to stroll down to Hooters with only a sour taste in their mouths and a good story to tell friends back home – a far better fate than that suffered at the hands of illegal taxi drivers by so many who came before them.

Letter from the Governor: Maitri Inthusut says so long to Phuket