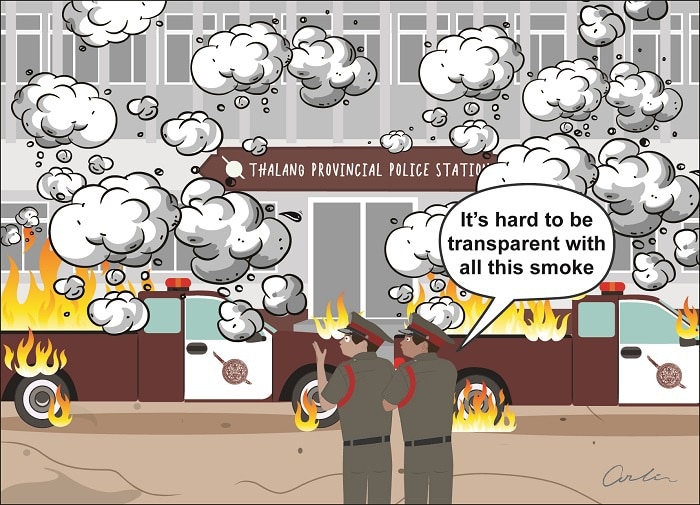 PHUKET: The Royal Thai Police must conduct a full and transparent investigation into the sad chain of events that led up to the riot at Thalang Police Station – all instigators must face justice.

Issues of democratic development aside, one of the silver linings of living under de facto martial law for almost a year-and-a-half has been the dramatic reduction in the number of tourism-killing road blockades set up by protesters.

Prior to the seizure of power by the National Council for Peace and Order (NCPO) in 2014, hardly a month passed without a roadblock of some kind. The island seemed to be dangerously close to slipping into a ‘protestocracy’ (story here), which was fostered by widespread self-entitlement, greed, corruption – and residents not trusting police.

The road closure caused hundreds of would-be passengers to miss flights and ended, as usual, when the officers were transferred out of the district.

Many, if not most, of these blockades have taken place in Thalang District, which has a long and depressing history of poor relations between local residents and police at all three of its stations: Thalang, Cherng Talay and Tah Chat Chai.

It is hard to keep count of how many times Ban Kor En community members have blockaded the deadly section of Thepkrasattri Road that runs through their community, demanding that changes be made to the curve to preserve the lives of those on that vital main artery and those who live nearby.

But the unprecedented riot at Thalang Police Station represents a particularly worrying break in what had been a period of relative peace on the island, and may reflect a growing public discontentment with the police.

Our national police force has failed to earn the same level of respect as their counterparts in the military and is still regarded by large segments of society as not only self-serving and corrupt, but also incompetent.

It is fortunate that the officers on duty at the time of the unprecedented violent attack did not fire on the attackers in self-defence. The restraint exercised is to be commended, as riot police in developed, as well as developing countries, far too often fail to do so, which leads to even greater violence.

However, the failure of well-armed police to ‘hold the fort’ as they are assaulted with sticks and stones could also be misconstrued by the public as yet another form of incompetence. Some might ask: How can they be expected to protect society at-large from so many miscreants if they can’t even protect their home turf?

It is in fact this restraint and the confidence that justice will be eventually served, versus the immediate desire to get even with the attackers, that will best serve the force in the long run. Police have already gathered enough solid evidence to put at least nine of those responsible where they belong: behind bars. However, it must be done with complete transparency. And, at the same time, it is equally important that the incident that triggered the riot also be investigated in a transparent way. Otherwise, widespread perceptions that Thai police are ‘above the law’ will continue to prevail.