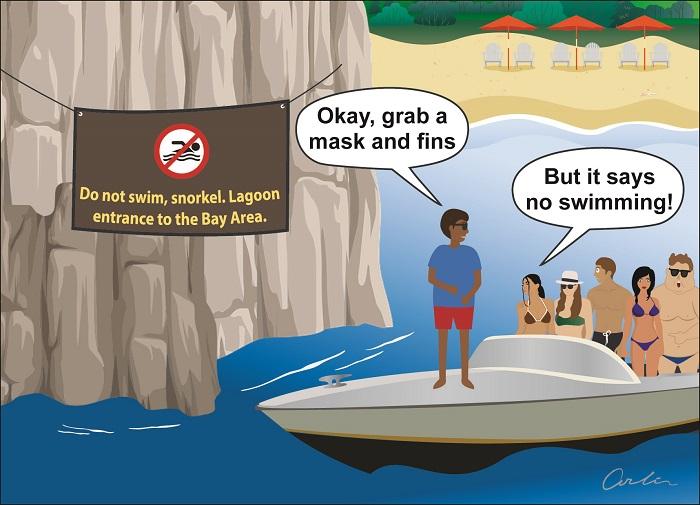 PHUKET: The spike in the number of marine related accidents in the Andaman is an issue of great concern. The beauty of the Andaman’s marine attractions is a major draw for tourists, but the recent deaths of a French snorkeller and Chinese diver, the maiming of two Russian divers and other marine fatalities so far this year is turning the azure blue sea red.

The major factors in these accidents appear to be a lack of ensuring safe snorkelling practices, reckless speedboat drivers and a general disregard for the law.

Though blame was quickly placed on the speedboat driver who ran over the two Russian divers, the dive community turned on itself regarding the death of a novice Chinese diver.

Taken aboard an unregistered longtail boat to an illegal dive location with an illegally working dive instructor, it is difficult to know exactly where to plunge in. However, there was a call from some for certifying agencies such as PADI to better ensure that those working under their flag are complying with local laws.

It is essential to punish those unwilling to comply with Thai rules and regulations. However, it is also important to rub out the cultural fine print allowing good laws to be bent. Nonetheless, the enforcement of these laws should not be down to independent groups, but government organizations.

The move to post ‘No Swimming’ signs at the busy lagoon mouth on Koh Hong shows awareness of the need to communicate directly with tourists who may, or may not, be neglected by their tour guides. And though park officials have made 200 ‘life jackets’ available for tourist to use for free, the reality of the situation is that most of the water-related deaths reported so far this year were people wearing personal floatation devices (PFDs).

Perhaps more spot checks to ensure that tour companies are following regulations are in order, as well as an update of regulations concerning the kinds of life jackets to be used by snorkellers.

Though more expensive, a life jacket is designed to turn an unconscious person from face down to face up in the water, allowing them to breathe. A personal floatation device, which is standard for the island boat tours that include snorkelling, simply keep a person afloat. Given the difficulties of enforcing any rules that demand tour guides give proper briefings before allowing tourists into the water, the simple – though expensive – solution is to ensure that boats providing snorkelling trips in the Andaman are equipped with life jackets, not PFDs.

Opinion: Sailing into the future