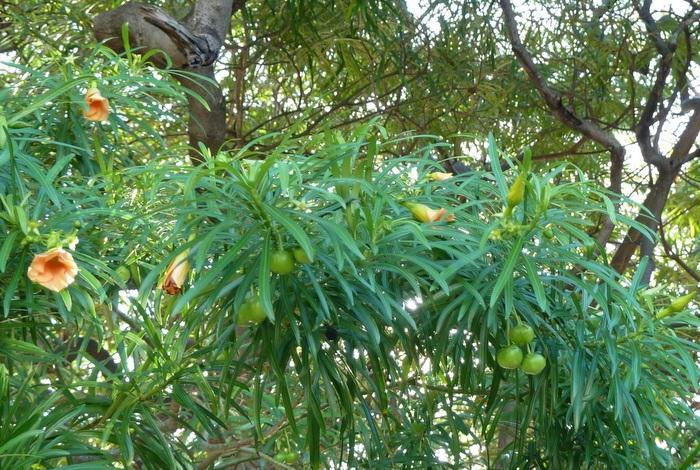 PHUKET: When I was knee high to a grasshopper in rural England, there were few dangers in the countryside. True, there were scary tales of deadly nightshade that would kill you if you ate the attractive purple-black berries, and of adders lurking in the hillside bracken with potentially lethal bites.

Of course I was blissfully unaware that one third of all the world’s flora contain poisonous compounds in their tissues. Here in Phuket, that figure is certainly higher. While many plants have edible fruits or leaves, significantly more are toxic. Knowledge, however, is everything. If you get lost in the jungle but know what to eat, you will probably come out in one piece.

But back to our Phuket garden. Many of the most poisonous plants belong to the huge genus of apocynaceae. Of these, one of the most lethal is the evergreen nerium oleander. It has been around since ancient times, and although classed as a Mediterranean shrub, it grows in many temperate and tropical climes. Indeed, it looks innocuous enough with its pleasant scented clusters of white or pink flowers – many hybrids now come in deeper shades of cerise and red – but all parts of the shrub are potentially lethal.

There was one infamous occasion when a family in New Zealand inhaled smoke from a bonfire containing oleander branches and were all violently ill. Legend has it that soldiers from the army of Alexander the Great died in similar circumstances. The culprit is a cocktail of chemicals that causes seizures or worse. More likely to be found in a Phuket garden is its cousin, thevetia peruviana, popular here on account of its vigorous growth and abundance of bright yellow bells. But it is the glossy green fruits, inviting perhaps to children or pets, which pose a potential threat.

As a general rule of thumb, any plant that contains a milky, latex-like fluid should be handled with care, a description which would include euphorbias, plumerias and adeniums (the juice of which was used by native Tanzanians to coat their arrow tips). A complete list would run to hundreds of plants and include tropical favorites such as angels’ trumpets (brugmansia), dieffenbachia or dumb cane, most varieties of lily, solanum and veratrum. Even the peel of mangoes and the leaves of tomatoes are toxic.

The worst of all though is the innocuous sounding castor-oil plant. A most attractive shrub with huge glossy, maple-shaped leaves, its purplish clusters of berries contain deadly ricin. According to the Guinness Book of Records, it is the most poisonous of all plants.

But before you rush out and dig up these offenders, remember that serious incidents resulting from their ingestion are extremely rare. Your children are far more likely to suffer painful rashes from poison ivy, stinging nettles or hairy caterpillars.

In fact, all these plants – and many more – are sources of complex compounds that are revolutionizing the pharmaceutical industry. To give one example: 3,000 known alkaloids exist in plants. Many, disguised in pills, capsule and injections, are already helping to combat ailments from heart arrhythmia and malaria to asthma and hemorrhages.

Despite what we do to her, never underestimate Mother Nature’s capacity for good.

Now is a good time to strike hard wood cuttings as the earth in your Phuket garden is moist to a depth of several inches. The lazy way is to insert them into a hole made with a metal skewer or stake, but if you can turn the soil over, it will aerate it, exposing potential pests and giving your cuttings a better chance.

With hard wood cuttings, make a slanted cut from the parent branch and remove most of the foliage. Six inch cuttings should be large enough with one to two inches embedded in the earth. Water lightly after planting.

Easy varieties to grow from cuttings include ruellia, solandra, hibiscus schizopetalus, thevetia, murraya, jatropha and thunbergia. Leggy growers such as dracaenas can be cut back to halfway and the cut part replanted. Plants with latex-like sap do better if left to dry out for a day or so.

If you have gardening or environmental concerns, contact Patrick at drpaccampbell @gmail.com. Many of his creative and academic publications can be found at his website: Green galoshes Wordpress.

Looking Back: When two kings sat on the throne – Part II