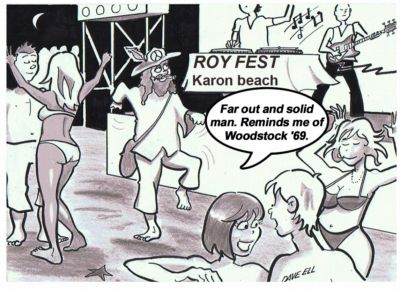 Phuket likes to think of itself as the island that offers something for everyone.

But the major events that take place here tell us a lot about the sort of tourists the island is best at attracting.

The Blues Festival, the Old Town Festival, the King’s Cup: all perfectly respectable, but much more appealing to the old than the young.

While Phuket is a magnet for families and retirees, it’s less popular with the average 20-something tourist looking to have fun – and spend cash – in Thailand.

Government quangos don’t have much of a reputation as rave organizers, but the TAT deserves credit for putting on two nights of great music, and getting the festival atmosphere right.

And names such as Japanese DJ Ken Ishii and England’s Absorb drew in tourists and expats eager for the kind of music common in the clubs of Tokyo and London.

The mix of artists, the packed crowd, the huddle of food stalls – Roy Fest felt remarkably similar to a Western music festival.

Added to good organization was a dash of luck: the rain that poured onto the island all day Friday and Saturday lifted just in time for the music, returning only for a couple of brief showers.

In place of the mud and drizzle that are the staples of many a ‘Euro fest’, there was sand and warm sea air.

And the traditional bane of any festival goer’s existence – the toilets – were remarkable easy on the nose, right to the end.

Roy, Southern Thai for fun, delicious and enjoyable, was exactly the right word.

What’s more, the birth of Roy Fest might be timely.

There are rumors that the days of Koh Phangan’s full moon party, which has drawn young revelers to Thailand for more than 20 years, are numbered.

The Surat Thani island is trying to change its image from drug-fueled party place to family destination.

Phuket already has that reputation, but there’s no reason it can’t make a grab for a younger party-going crowd too.

Plenty of these travelers have money to spend.

A growing number of the island’s venues realize this, and are starting to book DJs with international reputations: Club Lime, Stereo Lab and Sound spring to mind.

And with Karon Beach stretching for three kilometers, Roy Fest could become the biggest beach music festival in the world.

That would really put Phuket on the map.