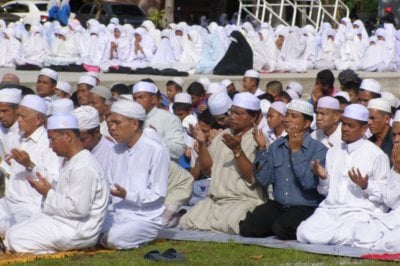 PHUKET: Muslim and Thai-Chinese religious groups held independent mass prayer meetings in Phuket yesterday to wish His Majesty the King a quick recovery as he receives treatment for a fever and a lung infection at Siriraj Hospital in Bangkok.

More than 1,000 Muslims gathered in prayer yesterday afternoon at the Dubai Mosque, Koh Kaew, which is also the location of the Phuket Islamic Office.

In the evening more than 1,000 Thai-Chinese lit candles and prayed for His Majesty in a songkaeng ceremony at Jui Tui Shrine.

The latest reports from the Royal Household Bureau are that His Majesty the king’s fever is down and that he is responding well to medication to clear up the lung infection.