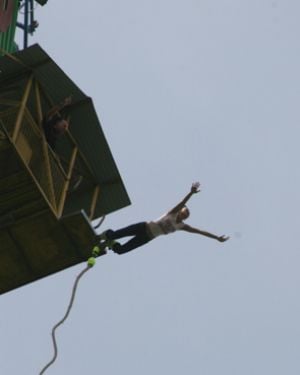 KATHU, PHUKET: A British tourist was nearly killed in a bungee jumping accident at the Jungle Bungy Jump center in Phuket, it emerged today.

Rishi Baveja hit the water below the 165-foot high platform at around 130km/h after the harness slipped from his legs during the jump.

Luckily he took the full force of the impact on his chest, escaping head injuries that could have killed him, the Daily Mail reported.

Mr Baveja reportedly suffered a ruptured spleen, collapsed lungs, a torn liver and severe bruising, spending a month in a Bangkok hospital after being transfered from Phuket.

Doctors likened his injuries to those of a car crash victim, the report said.

The entire accident, which took place on July 30, was captured on a video which can be viewed on the Daily Mail‘s website.

Terry Pearce, general manager of Jungle Bungy Jump, said, “We’re very sorry it happened. We’ve been open for 17 and a half years and we’ve never had an accident before.”

“He panicked and bicycle-kicked his feet out of the harness,” he said.

Jungle Bungy Jump had changed the material used to wrap the jumper’s legs to a new material which meant accidents were now “impossible”, he said.

“If someone jumps exactly the way he did, it won’t happen again. I can guarantee that,” he said. “You can come and try it yourself.”

The center’s insurance company had paid for Mr Baveja’s hospital treatment, he said.

Mr Baveja has since returned home.

Meanwhile, at the time of writing Jungle Bungy Jump’s website still claims, “We have a 100% safety record.”

This would be changed this afternoon, Mr Pearce said.

Asked why the claim remained on the site two months after a near-fatal accident, Mr Pearce said, “We just forgot about it”.