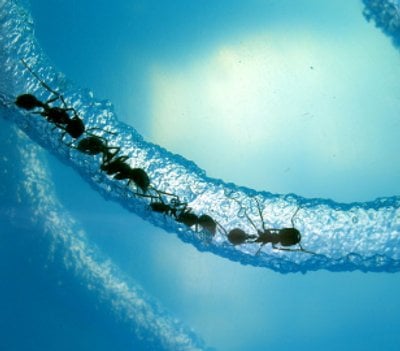 PHUKET: Consider the humble ant. Ever industrious and capable of astonishing engineering feats, she comfortably air conditions her entire polity, maintains traffic control so no one ever experiences a fatal collision, and supports avidly the concepts of sufficiency economy and Gross Domestic Happiness.

She lives in a crime-free, environmentally friendly colony, without recourse to burning hydrocarbons.

On Phuket, we too are highly industrious and ever a-building. We lavish our attention mostly on Phuket International Airport – our beloved cash cow, whence pours forth the stream of tourists who supply our daily bread.

They come to smell the roses, to play in the waves and to dive on the reefs.

On the assumption that ‘more tourists’ is always better, Phuket Airport is frequently expanded.

Barely a year after the last 516-million-baht expansion, finished in 2007, a 5.8-billion-baht upgrade was announced in May 2008. That expansion will almost double passenger capacity, from 6.5 million to 12.5 million per year, when completed in 2013.

The new construction is not prompted solely by tourism industry greed. Phuket Airport is Thailand’s second-busiest terminal and congestion there is increasing. It now must handle up to 15,000 passengers daily, arriving on some 50 flights, 25 of them from abroad.

Thus, the current project upon completion will include a wholly new international terminal; an improved apron and runway; more taxiways and aircraft parking space; and a more efficient aircraft fuel hydrant system.

Moreover, the current international terminal will have been renovated for domestic flights; a new car park will open; and the local branch of Airports of Thailand (AOT) will enjoy nice new offices.

Despite all this, according to AOT projections, the 12.5 million figure will be surpassed by 2020, at which time yet another expansion will be needed. Then the AOT will face a real engineering challenge, given the lack of room to add a second runway or expand the existing one to accommodate new generations of ever-larger aircraft.

Much talked of in foreign language publications is a planned VIP terminal for stabling private jets, so that the wickedly rich needn’t tread the same dust as commoners before coptering to their 720-million-baht beach cabins.

Phuket was said to be handling about 100 private jet operations a month last year, and hype has it that we need more.

But what we really need is less concrete and fewer hydrocarbons disfiguring our precious environment. Our seas should be pristine, and our coral reefs thriving so as not to disappoint the millions thronging to holiday on our shores, after suffering the queues at Immigration that all too often take hours to conquer.

When was the last time we spent billions of baht to restore our natural environment? Right, but of course if we had only acted over the past decade with the simplicity and good sense of a colony of ants, we wouldn’t now need to.