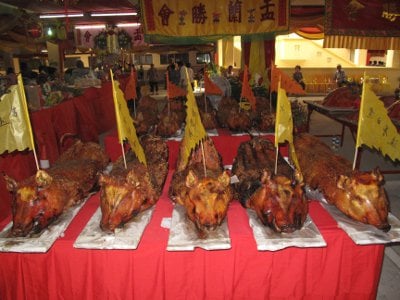 PHUKET: Phuket City Municipality hosted the annual Por Tor festival this week (August 26-27) to appease spirits said to be visiting families and roaming the streets of the island throughout their month-long reprieve from the spirit world.

On the third floor of the new building, which is to be for parking lot, Phuket Town residents gathered to offer food to ancestral spirits and itinerant “hungry ghosts” who might otherwise spoil the occasion.

On offer for the spirits at this year’s festival were elaborate displays of carved fruit, cooked meats, noodles, which in their length represent a long life, and traditional Chinese deserts and drinks.

Highlights included whole-barbecued pigs and red, turtle-shaped deserts known as ang-ku (smaller variety) and the larger tua-ku. The “sweet turtles”, made from wheat flour, are symbolically important as turtles are known to have long lives.

According to Chinese legend, legions of spirits are led from Hell back to Earth by the eponymous ghost Por Tor on the first day of the waxing moon in the seventh month of the Chinese calendar.

During their one-month sojourn, spirits visit their families and enjoy offerings of food before returning to Hell on either the 29th or 30th of the seventh Chinese month.

Upon their arrival and departure from “the land of the living”, tradition has it that young children are not allowed out in the evening. This is to protect them from bad luck or illnesses that may be inflicted by unappeased spirits who may also be on the loose.

Any leftovers from the feast are taken back by the donating families and either eaten at home or given to the poor as a form of merit-making.