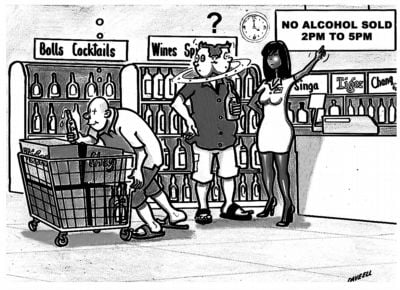 PHUKET: After more than a year in power, it’s time for the government of Prime Minister Abhisit Vejjajiva to rethink the confusing and ineffectual regulations that apply to the retail sale of alcohol products in Thailand.

First to go should be the regulation that limits the sale of alcohol at retail outlets to the hours of 11am to 2pm and from 5pm until midnight. This annoying regulation, put in place by the Thaksin administration at the height of its odious ‘Social Engineering’ campaign, was ostensibly enacted to stop minors from buying or consuming alcohol products on their way home from school.

The sheer absurdity of this rationale is demonstrated by the fact that people under the age of 18 are already prohibited by law from buying alcohol anyway – at any time. Could any Thai government really believe that the kind of mom-and-pop store operators willing to sell booze to teens at 9am are going to deny them the same privilege at four in the afternoon?

The government should get serious about enforcing the more important provisions of the 2008 Alcohol Control Act that call for fines and/or imprisonment for those who sell alcohol to minors, and abandon the time restrictions that inconvenience tourists and other adults who don’t have friends working in mini-marts.

Another vexing aspect of the ill-conceived regulations on alcohol sales hours is the amount of alcohol involved. Bulk purchases of alcoholic products are not covered by the law. This means the sale of a case of 12 large bottles of beer is forbidden between the hours of 2pm and 5pm. But throw three more bottles into the shopping cart and the sale is legal. This might actually encourage people to drink more alcohol than they otherwise would, which obviously runs counter to the objectives of the Act.

The people who suffer most from these restrictions are those who might be shopping at, say 4pm in preparation for an evening at home with friends, or who might not have the financial means or knowledge to buy alcohol in the amount required to exempt the purchase. And one can’t help but feel sorry for retail staff who need to explain the regulations over and over again to legions of bewildered, if not angry, tourists.

The sales time restrictions are only one of a number of alcohol control measures in Thailand that need revision or scrapping altogether. Another is the widely flouted rule, again put in place by Mr Thaksin’s Social Engineers, that requires entertainment venues to close at 1am.

No province suffers more from these draconian rules than Phuket.

Phuket currently has three MPs and two senators, including the chair of the Senate Committee on Tourism. It is time they get together and lobby Cabinet to change these curious regulations and reverse the damage they are inflicting on tourism.

OPINION: CCTV expansion in Phuket: Is it warranted?