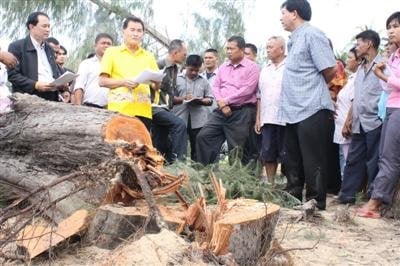 PHUKET TOWN: A police investigation into the mysterious felling of eight pine trees near the West Sands resort project in Mai Khao has yet to produce any suspects.

Members of a panel set up to investigate the matter met at Phuket Provincial Hall on Wednesday to discuss developments in the case.

The felling of the ‘ton son‘ pine trees caused local residents to set up a roadblock and issue a number of demands to the provincial government in early December.

Although the party responsible for felling the trees by chainsaw remains at-large, Tah Chat Chai District police are still questioning suspects in the case, the committee was told.

Several of the villagers’ other demands have been successfully addressed, the panel learned.

Mr Manoch said villagers feared the resort would restrict use of a six-meter-wide stretch of road that runs for 550 meters along the beachfront, near where the pine trees were felled.

“Some sections of that road now belong to West Sands. Though we have never had access problems in the past, we were afraid they would restrict access in the future. So we asked that they agree to designate that road as open to the public, and they have already signed a document to that effect,” he said.

In another development, a Memorandum of Understanding (MoU) signed by West Sands management and Sirinart National Park has been scrapped.

Sirinart National Park chief Nonthawit Jaturabandit said the hotel had been informed that the document was declared null and void a week after the protest, as demanded by the protesters.

Land Department lawyers have also been asked to review the terms of the document to see what obligations to the park it contains, if any.

The scrapping follows the recommendation of a Senate panel that came to investigate the case in December.

As with many land disputes in Phuket, poorly delineated boundary lines are a key issue.

Phuket Land Department officials and the West Sands management are reviewing all the land title deeds and related documents and will meet at the site on Tuesday to agree upon and mark out the exact boundary between park land and resort property, the panel was told.

The West Sands case is only the latest in a number of disputes between resort developers and local residents over land rights in coastal areas of Phuket.

In some cases, including the stretch of Bang Tao Bay in front of Laguna Beach Resort in Cherng Talay, local residents continue to run small beach businesses that block sea views for resort guests and offer tourists much cheaper food and beverage services than those offered by the resort.