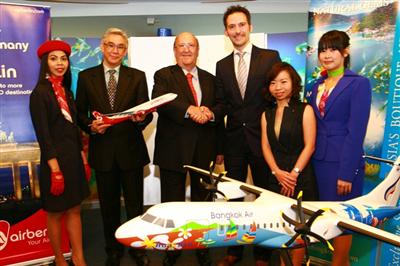 PHUKET CITY: More good news for the Phuket tourism industry came earlier this week when it was announced that German carrier Berlin Air has entered into a codeshare agreement with Bangkok Air.

A codeshare agreement enables two airlines to sell seats on the same flight.

In this case, Air Berlin customers will benefit from a wider choice of flights and convenient connections aboard Bangkok Airways flights, including five daily return flights from Bangkok to Phuket.

The arrangement also makes it easier for German holidaymakers to get to Koh Samui and Chiang Mai.

In the upcoming high season Air Berlin will be operate four non-stop services a week from Düsseldorf to Bangkok, as well as three from Berlin and two from Munich.

In 2008, Berlin Air transported a total of 28.6 million passengers worldwide.

Phuket gets ready for Loy Kratong