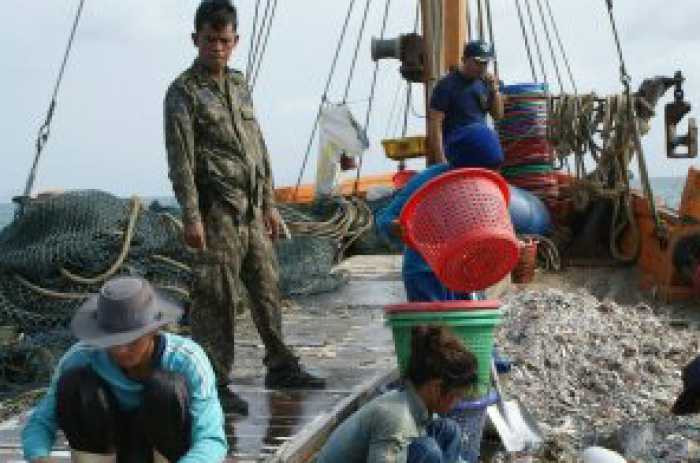 Jaroenchai Srisuwan, 48, from Songkhla, has been involved in Phuket’s fishing industry for more than 10 years. In March 2013, he became chief of the Krabi Fishery Management Center. During the short time that he has been chief, he has dealt with more than 100 cases of illegal trawling and arrested more than 250 suspects for illegal fishing.

Here, he talks about the struggles of combating illegal fishing, and the need to protect sustainable fishing practices for generations to come.

PHUKET: Under Phuket’s maritime fishing laws, no commercial fishing is allowed in the Andaman Sea within 5,400 meters of the coast (only 3,000 meters for Phuket), but as many people know, commercial fishing trawlers are constantly flouting this law to take advantage of the abundance of fish in these waters, where there is less competition.

One of the reasons commercial trawlers continue to break the law is because the charges they face are miniscule when compared to the profits they can reap from fishing in illegal waters.

As chief of the Krabi Fishery Management Center, I am at a loss as to how to deal with this problem effectively, because the charges that trawlers and their crews face are so ineffective, they do not act as a deterrent.

There are good reasons for protecting areas near the coast. Not only does it protect the natural habitat, but it also allows local fisherman to practice sustainable fishing methods that have been around for centuries. Many local fishermen still rely on traditional methods and they have to be protected from those trawling methods which can damage local nets placed closer to the coast.

My job is a difficult one. So many times we have arrested crews of commercial trawlers, only to find that they have been immediately released. The problem is that there are many loopholes in the current maritime law for illegal fishing. First, even though the law says we can seize the boats of those caught fishing illegally, this is almost always impossible. That’s because the same law says the boat can only be seized if the owner is on board. In almost all cases, the boat is rented out to fishermen, which means the real owner of the boat cannot be held responsible, and therefore the boat cannot be seized.

In addition, fishermen who are charged under Section 32 of Thailand’s maritime law often get off with only a very small fine to pay. While the law allows for a fine of up to 10,000 baht and a jail sentence of up to six months, or both, if the accused fishermen admit to the crime they will only have to pay a fine of between 2,500 and 3,000 baht. They can then return immediately to work with no repercussions, which makes them less afraid to break the law again.

The problems surrounding the law have been brought up in meetings with local government on a number of occasions, but so far our concerns have been met with silence. The only thing we can do right now is deal with the problem on a day-by-day basis.

Local fishermen act as our eyes. Fishing platforms set up in restricted zones are often damaged by commercial trawlers, so many local fisherman are ready to report illegal practices. Sadly though, this is not enough, and many vessels are able to get away scot-free.

These laws have been put in place for a reason and everyone should respect the rules, which, in my opinion, treat everyone fairly. We all need to take care of the resources available to us, if we want them to last. It’s up to all of us to work together, if we want to solve this problem for the long term.

Bag it up, Phuket