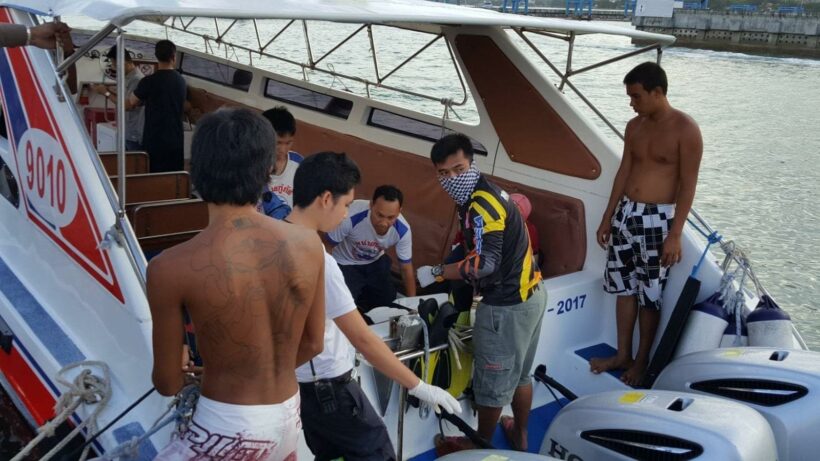 The body of a Chinese man was identified by the Phuket Tourist Police as 30 year old Su Wang when his body was brought back to Chalong pier. No signs of struggle were found on his body. His body was taken to Vachira Hospital and consular officials notified.

Two other male Chinese tourists who had been choking and taken in a lot of water, 29 year old Liang Yu Lin and 26 year old Pu Bin, were taken to Bangkok Hospital Phuket by tour operator. Both are now safe.

Maj Eakkachai Siri of the Phuket Tourist says, “These three Chinese tourists had been travelling with Apple Tour to Racha Island with the Nontasak Marine boat operators. There were 35 tourists in the tour group. They were scheduled to travel with this tour group from June 20-25.”

“The incident happened around noon. These three Chinese tourists headed to the water for a swim after finishing their lunch. They didn’t inform the tour guide and didn’t wear life jackets.” (recommended for many Chinese when they go swimming as an additional safety measure)

“Big waves hit them even though they were only in shallow waters. Lifeguards quickly rescued two of them while Mr Su had disappeared under the waves. Shortly after a speedboat spotted the body of Mr Su and his body was brought back to the land.”

Vice Governor Thawornwat says, “We are very sorry for this tragic loss. Relevant offices are coordinating with the Chinese Consulate in Phuket and assisting with all the documentation. We will be speaking to the tour operators about the incident. We insist that tour operators take better care of the guests in their care.”