One of the world’s great long-distance athletes has added his praise for rockstar Artiwara “Toon” Kongmalai’s epic 2,191-kilometre run for charity.

Britain’s Mo Farah, who has twice won Olympic gold medals at both the 5,000 and 10,000 metres, has posted a photo of himself holding a running shoe on his Facebook page “Mo Farah” and Instagram “gomofarah”, saying: “Keep running @artiwara. Leave all your records behind. The next step is a new start. #breakthrough #break2191k”.

The shoe he carried was also signed with a message “To Toon Keep on running!”

34 year old Farah, who was born in Somalia before migrating to the Britain at the age of eight, is regarded as one of the great all-time athletes after doing the 5,000-metre and 10,000-metre double at both London 2012 and Rio 2016. 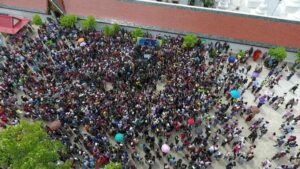 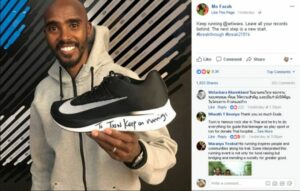 1.    People coming together to do good things with their hearts and learning to give without expecting anything in return.

2.    The example of self-esteem and admiration for oneself and others, resulting in encouraging people have more energy to live their lives with happiness and less stress.

3.    The example of goal-setting and optimism about the future empowering people to have determination, willpower to achieve and eventually succeed despite obstacles.

4.    The example of encouragement from people around, such as family members, boyfriends and girlfriends, and friends and fans that gave the sense of unity and camaraderie to overcome problems and to maintain one’s focus to achieve a goal.

5.    The benefits of exercise that help the brain produce endorphin, which is the body’s “feel good” chemical, making a person more cheerful and less stressed.
Boonrueng urged the public to apply these five happiness-booting factors in their own lives. 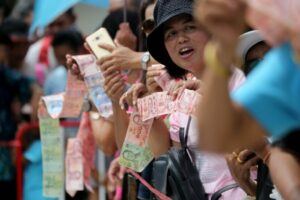 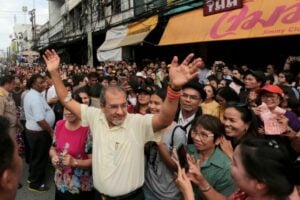 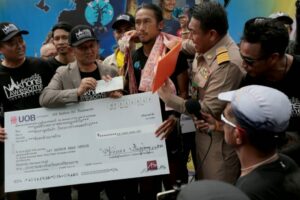 Meanwhile, Dr Wiranpat Kittitharaphan, deputy director of the Mental Health Service, said the “Toon Fever” phenomenon also gave society a hero that inspired children and young adults to learn about the benefit of sacrifice to do good things without wanting anything in return and how exercise is good for health. “This can create a good image in young minds so they follow such good things. You can already see some children bringing their piggy banks to give donations to the 11 hospitals that Artiwara’s run is raising money for,” Wiranpat said.

“Even those suffering from depression can be inspired by Artiwara’s run,” she said. Having a good role model to learn that people can do good deeds despite having no monetary reward was important to children and youths, she said, as this age group’s members were looking for examples and wanted acceptance from their peers and society.

Artiwara’s progress in his marathon 2,191 Km run can be followed on the Facebook page.