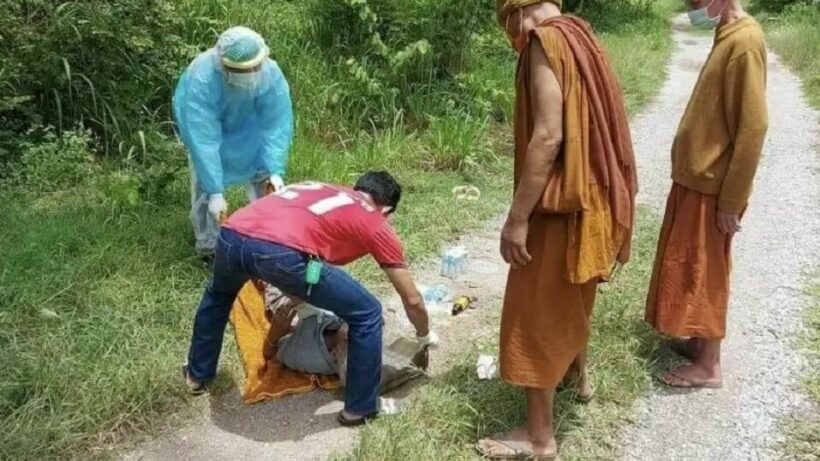 A husband and wife dropped off an 80 year old man they referred to as father, at a temple in Nakhon Ratchasima/Korat in northeastern Thailand. After they dropped off their patriarch with nothing but a cloth bag, they drove off. The man was later found to have Covid.

One Facebook user who claims to be a medical worker at the Bua Yai Hospital posted a picture to their Facebook of the elderly man lying on a dirt path next to some grass. The pictures came with a “written condemnation” of the daughter’s poor treatment of her nearly century old father.

The abbot of Wat Pa Suan Thamma Sawaddee, Luang Phor Sitthichai, says that the woman and her husband dumped the unnamed 80 year old off at the temple on Sunday. This morning, the unnamed man was found walking away from the temple and later discovered lying on the trail. Health officials took him away for a Covid test which later turned out positive.

The couple’s explanation was that their “father” had known the abbot when they had previously lived in the Khon Khaen province and that the unnamed 80 year old wanted to stay with the abbot at the temple.

The village head, Thongsuk Thaebtham, says the man told him that his daughter took him from the Lop Buri province to bring him to the temple. The man has since been taken to a hospital in Khon Kaen for medical treatment.

Those who came in close contact with the displaced 80 year old, including monks, health workers, and rescuers, are now in a 14 day quarantine.

Thongsuk disagrees with the daughter’s treatment of her father and says her actions placed others at risk of catching Covid.

Jafagreg
What a sad story. When I think about the close ties of Thai families that I have been so privileged to have seen, I have to wonder how desperate these people must have been to do this to this poor…